No store without Sheryl

WITHOUT SHERYL HART, there is no Second String Music. I'm living the dream and she is the reason, and I count myself a very lucky man. 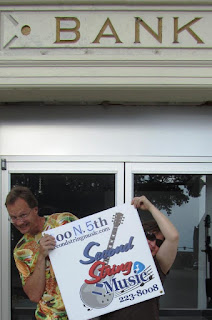 Sheryl had the idea more than five years ago. She was the one who figured out what we needed to do to get started. In the first two years, she manned the store while I worked at the paper. She does it all - the ordering, stocking, budgeting, filing, bill paying .... and she is also the landlord of Harty PM LLC, with four tenants (5 including the music store) in our beautiful Fifth and Maine building.

I teach guitar lessons, sell stuff, and I'm getting a little better at being in the store alone. Sheryl is substitute teaching a few days a week and at first, I was terrified to  be in here by myself, but now I actually look forward to it. I also look forward to Sheryl undoing all my screwups when she gets here in the afternoons.

In the early days, I used to watch in amazement as some of our more interesting musicians tried to run her over. They saw a woman and they thought it would be easy to intimidate her. Uh .... wrong.

There's a reason we are still in business five years later and things are good. The reason is Sheryl Hart.