WHILE ENDURING YET another riveting Property Brothers episode on HGTV last night, Sheryl said we had received a  one-star review of Second String Music on Facebook. This isn't a cause for concern - 99 percent of our reviews are positive. Every review teaches us something. We look at the information, learn from it and move on. This is how we grow into a better store and serve even our grumpiest customers better.

We have deduced that the only way to give every person a five-star experience in our store is to read their minds. So Sheryl and I are enrolling in mind-reading school in St. Louis. We will close the store for a month, get a fancy hotel room and earn our living on the streets, I will bring the guitar and enjoy busking on street corners to help pay for everything and Sheryl will spend it as fast as I earn it. She loves being the irresponsible partner in this relationship.

What frightens me most is that I may learn what Josie, Eddie and the dogs are thinking. "Hey tall guy, take us for a walk NOW," Angus thinks. "And this new dog food is about to give me the runs. And I am about to barf on your new rug, and the cat just dragged another half-eaten bird into the house. Where are the pork chops you cooked last night? I might have snarfed them down too!"

After learning to read minds, I can only imagine what the next disgruntled review will look like. "That tall guy knew my every thought and action before I even realized it. Those music store people are creepy!"

So we decided to imagine our next review after learning to mind read. We would know it before he wrote it and preemptively turn off reviewing before he could post it!

"I went to Second String Music today and frankly, I was disappointed with the service. I didn't know exactly what I wanted, and when I said I need a thingy that plugged into my amp via a connector thingy, the woman behind the counter said she knew exactly what I needed. How did she know? She made me feel really small and insignificant, being so informed. It's like she was doing her job or something and I didn't like it. Why would these people be so intuitive? My wife had a long conversation with that woman and came back to the truck acting 'different.' 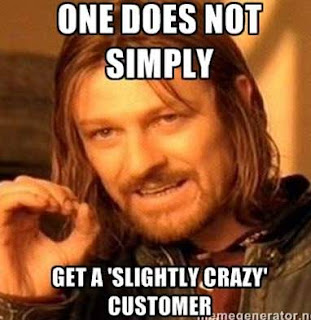 "Then I was talking to the tall goofy guy and he seemed clueless but nice enough. He said, 'I'm sorry sir, but I have to give a guitar lesson in a few minutes. Sheryl can answer any other questions you have.' How rude! Guitar lessons, during the day, when the store is open? How can you possibly survive doing that? Why does he even own a music store??!!

"I was about to ask if they carried any real brands of guitars, and the goofy guy said, 'Well, Fender, Gibson, Martin and Taylor won't work with small retailers. I'm sorry, but we are unable to carry these brands, though we have some awesome used items.' What? They won't work with you? I guess I'll just have to go online and order one, then. And I can order three guitars stands for the price you charge for one. Actually I did that a while back, and they all broke within two weeks of arrival, but I saved money and that's the main thing.

"In short, I felt slighted and uncomfortable. These people seemed to think they knew my every thought. I stormed off into Washington Park after I left and commiserated with some very nice people who said they'd been sitting at the picnic table for a decade. (That was a joke I'm sure. At least I think I'm sure.) They don't like you either. It made me feel better. I won't come to this store again and next time I'll head down the street or just order it online.

"P.S. How much were those converter thingies again? Nobody else seems to have them and I guess I'll have to buy one from you eventually. Thanks, Mucphers."
Posted by SheyFey at 10:52 AM