IT SEEMS OUR mouser is more of a birder. And that means bad news for our winged friends in Calftown and around Hart Manor House.

We got Josie the Calico a few months ago. Sheryl's excuse was that Josie was going to be our mouse catcher, but this winter we have not had mice in the house. Usually our dogs can catch them, but none compared to the Queen of Calftown, Lucy the Border Collie, who was adept at finding and killing mice.

Josie is getting bigger and hopping around like a kangaroo on her long legs. She loves going outside, running around with the dogs and hunting prey, and now she's fast enough and patient enough to snatch birds from the bushes around our house.

Three times in the last few days she's caught a bird and carried it back into the house. The bird, of  course, is traumatized and screaming at the top of its little bird lungs. Josie is quite proud of her catch and wants to show it off, but she hasn't quite learned how to kill the bird first to keep it quiet before bringing it in.

Of course the dogs think the bird is a new toy, adding to the chaos of Josie proudly marching around with a fluttering and bellowing creature in her mouth. Then Josie drops the bird by the bed and comes up to us with a smirk, as in, "This is was too easy. These birds think they are so smart. WRONG. I'm going out to get another one!" 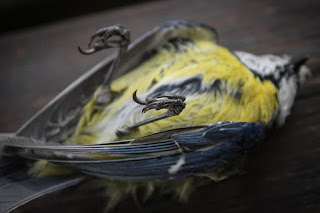 This morning the bird hopped under the bed, and I had to herd the dogs outside while Sheryl put on gloves and tried to catch the poor wounded creature. She eventually got it, put it outside, and it hid under the porch. Later I saw it going across the lawn and into the safety of the neighbor's backyard, thought it is probably only safe until Josie goes back outside again.

We are somewhat horrified by our cat catching birds (and not killing it right away). Josie and the dogs think it's the greatest thing ever and consider it a big game. It all depends on your view, like anything else.

So the next time I'm sitting on the porch drinking my morning coffee in the glorious spring sun, and I hear an awful screaming and see the cat running up the sidewalk, I will close the back door and ask Josie to either put the bird out of its misery, or just play with it in the backyard.