THIS POST IS for all you 50-somethings who play guitar or love music. You remember hearing this amazing song on the radio in 1990, by this guy from Austin, Texas. Then you saw him on Austin City Limits and you were blown away again.

Yup. Eric Johnson, of Ah Via Musicom and Cliffs of Dover fame. Except this guy is not just a flame-throwing guitar player - he's been making his own music for more than 40 years, and he's even better with age.

Saturday night in Bloomington, Ill., Mike Sorenson and I caught his Ah Via Musicom tour at the tiny Castle Theater. The Castle is not much bigger than One in Quincy, and there were maybe 600 people in the venue. 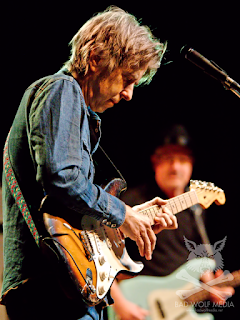 Let's throw out the whole being objective thing here, because I know every note and word from Ah Via Musicom, and from Venus Isle, and from Bloom and from Souvenir. I remember leaving Alpena with his song "40 Mile Town" playing in the car and crying. Sometimes an album or song will have lasting impact on you. It's the power and impact of music - it's a big part of your life, no matter where or when you hear it.

This was the third time I've seen Johnson and I think it was his best show. He's playing with his original bandmates, drummer Tommy Taylor and bassist Kyle Brock, and they are amazing. When he plays in a small venue you can hear every snare drum, bass line and Johnson's signature violin tone. Johnson's Fender Stratocaster goes from dripping church bell chimes to furious overdrive in song after song, and you have to hear it to believe it.

Opening the show was Arielle, a young woman who sings, plays guitar and piano, and performed several songs with Johnson without any fear. After her six songs, she introduced Taylor and Brock, then asked the crowd to welcome Johnson. No frills or fireworks here, just three guys about to blow the place apart. 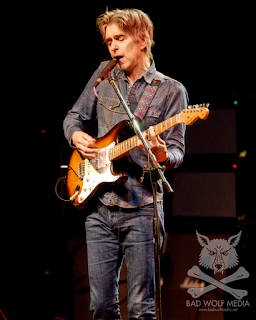 The first set featured a variety of songs, including a Beatles cover (The Night Before) and an acoustic version of Led Zeppelin's Black Mountain Side. Johnson jokingly played the first few notes from Stairway to Heaven, and the beauty of playing a small venue was his ability to hear the crowd banter and his responses. "Well, it's either that or Helen Reddy." A few times people were asking for songs, and he said, "Don't worry - we are playing the entire Ah Via Musicom record in the second set."

Cliffs of Dover was dutifully played, but the rest of Ah Via Musicom was a joy to hear live. Nothing Can Keep You From Me and 40 Mile Town sent chills through my body, and you could tell he enjoyed playing the songs.

This was Johnson's ninth show in 10 nights, yet he and the band didn't mail it in. Most people don't realize just how hard that can be - I play a show with the Cheeseburgers and I'm a zombie for two days after, and that's without the traveling. I give Eric and his band full props for busting their butts and giving everybody a great night of music.

He's at the tail end of this tour and playing at the Pageant in St. Louis Thursday night. If you like his music or a fanatic like me, I suggest you check it out, because he's amazing live.

Thank you, Mike, for taking me to Bloomington and seeing one of my all-time heroes. He took some amazing photos and I'll get a link up to his site when he posts them. 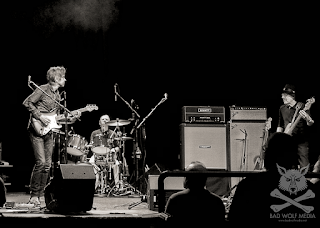