OUR NEIGHBOR, DON, passed away last October after living nearly 60 years in the house next to us. We miss him puttering around in the yard, especially with spring in the air. His kids have been cleaning out the house and have filled two dumpsters with stuff - you can imagine how much accumulated over the years.

One of the things they found and we now have for sale in the store is a Baldwin organ. The original paperwork is still in the bench, including the warranty card, manual, sales receipt and a "Reading Music with Tom Bonaventure" book, along with other Christmas music books.

The organ was purchased from Byerly Piano and Organ Company at 505 Hampshire on Sept. 16, 1969. The original buyer was Don's sister-in-law, and Don's wife later bought it after the sister-in-law passed away. It cost $1,821 and was considered the top of the line model. It's called a Baldwin Orga-sonic Model 56R Series. It has two levels of keys, 44 on each level, foot controls and all kinds of bells and whistles. And it works. 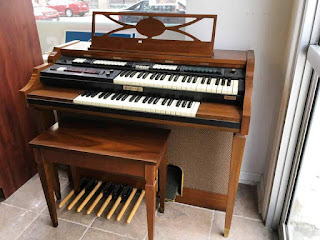 505 Hampshire is now a parking lot by WGEM. The original sales receipt was signed by Noble Byerly. It's amazing how nearly 50 years later the organ is for sale again, and just one block from 505 Hampshire.

I found a fascinating online reference to the store written by a Quincian. Apparently Mr. Byerly was well-known and famous for his business.

It's not that big but takes two people to move it. That might explain why the ones we found online are being sold for $500, local pickup only. Our price is $329, and you will get to move it yourself too.

Still, it's a way cool instrument and a lot of fun to play with. It's in mint condition and just begging for a good home. And it's at Second String Music, where you can play it and decide for yourself just how cool it is!
Posted by Rodney Hart at 11:47 AM