Inside the old bank at Fifth and Maine

THE HISTORY OF our historic Dodd Building utterly fascinates me. Sheryl says I'm obsessed. She's right. I love history and our building has been a big part of Quincy history since 1896.

I've seen almost every old photograph of our building, from the time it went up to when it had the addition constructed in the early 1920s. It hasn't changed much, though the owners in the 1980s and 90s put blue siding and strange awnings on it. 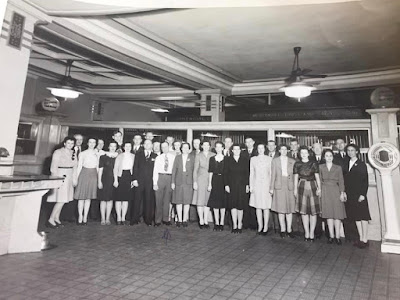 I published some photos of the inside a couple of weeks ago on a Facebook page, and the post got tremendous response. I've seen very few old pics of the inside, and wouldn't it be interesting to see old Bedford Dance Studio photos or pictures of the Wilson & Schmiedeskamp law firm. Somebody had to have taken pictures of the two women who manually operated the elevator.

A women sent me a photo (above) of the Mercantile Bank employees, taken on the main floor where our music store is today. It's probably from the 1940s or 1950s. A large group of employees is standing in front of what is now our stage toward the east end of our space, facing west. Behind them is a massive marble counter, and the building still has tons of marble pieces from when it was sadly dismantled.

If you look to the left, you'll see the old sky light. It was boarded up after this photo was taken, presumably because it was leaking and no longer needed to cool and heat the building. There's also a cage to the far left, and what appears to be audio speakers on the pillars. They are still up there. The flooring is rather interesting, too. 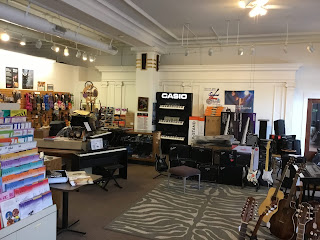 The safe has a sign on it. We were looking closely at it today and we wonder if it was boarded up. There are screws and what appears to be wooden molding over where the sign was located, and we are attempting to take a peak and see if the sign is still there. In what is now Electric Fountain Brewing, we took a plate off the safe and discovered the Mercantile sign. It would be a lot of work to take a look, but we are curious ....

It also looks like the counter extended around the pillar on the left, so that's gone now, too. I really wish the camera would have swung a little bit left, because I bet we would see the staircase that leads to the basement and to the huge basement safe.

Last week a customer came in and said she used to work for George Lewis, former building owner. She had an office in the first floor safe, and from what she described the whole layout was a lot different.

Thank you for the photo. If you have any old building pictures, especially of the interior, we'd love to see them.
Posted by Rodney Hart at 10:32 AM