WE HAD A blast as usual last night with the HartLyss Facebook live stream. Cori and I love playing songs we don't know, or at least played together. One of them train-wrecked last night, but the point is to keep plugging away and keep it different and fresh. We are getting tons of views and we very much appreciate all the Venmo love, too.

When Sheryl and I got home about 9, we found our back gate smashed and off the hinges. We checked our Ring footage, and sure enough, some POS is seen running through our backyard about 6:30 p.m. and crashing into the fence. This photo is small and blurry, but he's stocky, black hair, has a tattoo sleeve on his right arm, a black shirt and blue sweatpants, and white and orange tennis shoes. Too bad we weren't home and the dogs weren't in the backyard. Genie would have taken him by the hand to gently escort him across the yard, and Angus woulda scared the shit out of him with his piercing bark. Malcolm would have done Crazy 8s around the dude and trapped him in our garden.

The gate is pretty much ruined, completely off the hinges. We will figure out how much it will cost, but it's more about the stupidity of humans in general and frustration. 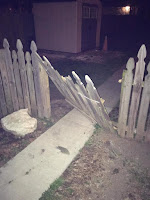 We talked about it for a while and then I called the Quincy Police to report the incident. Look - we have way more serious crimes and stuff going on right now, and I don't want to take up the valuable time of an officer during a very difficult time. But we figured it couldn't hurt, and who knows? The officer who took my report over the phone was very thorough (normally he'd come to the house, but not these days).

The fine officers of QPD won't necessarily say this out loud, so I'll say it for them - they spend 95 percent of their time dealing with the same 5 percent of the idiots out there. Don't argue with me about this or I'll make you fix my fence. Anyway, there's a small chance QPD might recognize the gate-crasher. We would like to, uh, have a polite chat with him. Ahem.

Fortunately, we've had few and far between issues in our Calftown hood. We still love living here. We won't let a gate crasher change our mind.

Six hours later and one trip to Lowe's, Sheryl has the back fence and back gate fully repaired. The gate now closes better than it ever did before, thank you gate crasher!