SHERYL WAS WORKING in the front yard Sunday morning around 8 when she heard someone screaming “MOMMY.” She ignored it and kept on clipping the front shrub near the neighbors yard. The screaming continued and got just a little bit more frantic so she put down her shears and stuck her head over the shrubbery. Way up the block was a little girl running up the sidewalk screaming for her MOMMY. Diaper, T-shirt and socks. Perfect.
She went over and calmed the girl down and asked if she knew which house was her mommy's. What car? What is mommy's name? Last name? If you have ever talked to a 2-year-old, you know that Sheryl couldn't understand a word. So she called 911 and asked for assistance.
Several Quincy Police officers showed up. They decided to have Sheryl keep her in the house while they canvassed the block. Mom and dad would be missing her soon so they were totally confident of finding them. 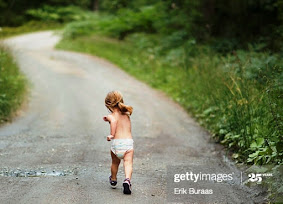 The toddler had a fresh diaper on and looked healthy. Strange, a little one like that roaming around the street. You think the worst and you wonder if there are other issues at home, etc. Sheryl told me not to put those negative thoughts out there. She was sure it was just a child that had gotten out of the house somehow.
With permission from the police officers, we made her scrambled eggs and bacon, and gave her chocolate milk. She had quite the appetite. Bacon and eggs - yum!
When the officer came back, the little girl got scared again and insisted Sheryl pick her up and hold her. The officer asked the little girl a couple of questions but still got nothing. We told him it was fine. We could just keep her calm and keep her company.
A few minutes later, an officer located mom. Turns out she lived nearby and had been up really early, and she simply fell back asleep. Apparently the little girl managed to get outside and on the porch, then wandered away and became disoriented.
Mom was glad to see her baby. After some thorough questioning, police determined there was no willful neglect. I've seen the mom with several small children before and she keeps a close eye on them when they are walking out to the car or playing on the porch.
Sheryl used to be a foster parent and her old shepherding skills came in handy. We'd like to think our little stretch of Calftown is a safe place and we all look out for each other, but you always wonder about the world, too.
It ended well and I still make a mean breakfast of scrambled eggs and bacon. She did drink my chocolate  milk. Hopefully I’ll get over the trauma.
Posted by Rodney Hart at 9:05 AM