WE HAD ANOTHER birthday of significance recently  - Malcolm, our little Cowboy Corgi of doom, turned 1-year old last Saturday. We celebrated with a long cemetery walk, some belly rubs, and treats. Well, actually, it was just another day at Fifth and Maine and in the Calftown Hood. Malcolm loved it. 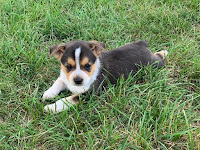 Malcolm is fierce, irascible, demanding, a cuddle bug and super friendly with strangers. He has a habit of chasing rabbits down cockleburr-infested hills in cemeteries and barking at other dogs walking around Washington Park. He loves stealing the ball from Uncle Angus, which often sets up a cacophony of barking and mayhem. He's very good at stealing the food off your plate (Sheryl is still traumatized by the "pork chop incident" the other day) and he fails to understand why I would give Genie some love and not pet him at the same time.

And just when you want to yell at him and banish him into the puppy corner, he wiggles his little Corgi butt and stubby tail, perks up his ears and turns his head sideways. "Hey," he says. "It's not my fault I'm awesome and you love me. And you didn't finish the belly scratch from earlier today." 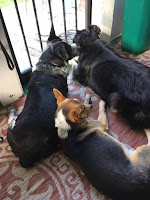 I think a lot about Tucker, our beautiful Border Collie who passed away a few weeks after Malcolm came to live with us. Malcolm has filled the void and is working on becoming a part of the two-headed dog with Genie. Tucker and Genie were inseparable most days. Sheryl expects him to start riding around on Genie's back someday...

Our lives revolve around Second String Music, guitar lessons, big gardens, three dogs, and two cats. And it's a good thing. Our lives would be boring without these great animals/babies.

So happy birthday Malcolm, you little bleep. I'll give you another couple of belly rubs this afternoon at the store between lessons.

Here's to many more, and keep the barking down a bit, would ya? What? He's a Cowboy Corgi? Oh. Never mind.