SHERYL HAS BEEN having fun using the Quincy Public Library's online newspaper archive to find out more about our house. She is still looking for a photograph from back in the day, but she has found out about previous owners and some interesting stories.

In 1903, a police officer named Tom Ryan lived in our home. His neighbors were Fred Brinkoetter and William Adams. All three families had noticed chickens disappearing for a few weeks, one or two each day. Each had chickens in the back yards. The wife of Fred Brinkoetter decided to have a chicken dinner, so she dispatched her husband to the chicken coop behind the house to get a chicken. Lo and behold, Fred found a chicken with its wings tied together. The chicken had "evidently made its escape from someone who caught it with the intention of carrying it away." A count of chickens revealed several missing.

This, of course,further incensed the neighbors. There was such an uproar that "it is said a shotgun and not the police will be brought to bear on the thieves."

Fast forward 117 years later and you might have the same reaction to a vehicle and garage being defaced, probably right by the long-gone chicken coop, but we don't own a gun and we'll just let it go at that.

Miss Mary Hynes died from "hemorrhage of the stomach" in the house Oct. 6, 1897. Her mother was Mrs. Bridge Ryan, and she was the sister of officer Thomas Ryan, of the police force. There are no clues as to the circumstances of Mary's birth to Bridget. Sheryl needs to know if Bridget was previously married but the newspapers don't tell us much. She is described as the half sister of Laura Ryan in a 1902 obituary.

Bridget Ryan died of "grip and asthma," or flu. She was considered one of the pioneer residents of Quincy. She was also "one of the oldest and most devout members of St. Peter's Catholic Church." Born in County Tipperery, Ireland, she immigrated to this country at an early age. She was the mother of the aforementioned police officer, Tom Ryan. Tom eventually became police chief. WOW. 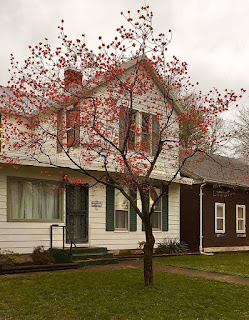 Andrew Richter was the father of Theresa Ryan. She was the wife of Bridget's son William Ryan. Andrew was 79 when he died of "senility." Andrew was an immigrant from Westphalia, Germany and lived in Quincy for 53 years.

Sheryl learned there was a fire in the house and the stairs to the basement had to be rebuilt. There was also a mention of Esther Likes, who had a beauty salon in the front part of our house in the 1960s. That explains why the washing machine and dryer are in the front room, where Esther likely had plumbing put in for the salon. The room used to be an open front porch, and the transom window over the entrance to the living room is still there.

There were other interesting tidbits and it's nice to know a little bit about our Calftown house, built in 1885. Again, it would be really cool if we could find an old photo or two.

Next up, Sheryl says she might poke around the library newspaper archive to learn more about our historic Fifth and Maine building. There is no doubt there's lots of history to sift through.