Lawnmowers in the Hood

ACROSS THE STREET from where Sheryl used to live is a crazy old man named Wes who fixes lawnmowers. He has a bunch of them for sale neatly lined up in his backyard hooked to a chain, and he uses his garage and shed when he fixes them.

Many a time when Sheryl lived by him she'd hear him cuss and moan when a mower wouldn't start or a part wouldn't fit. He became part of the neighborhood lore known as the eccentric guy who can hook you up when your mower goes bad.

We chop a lot of weeds in our backyard and the mower got kinda nasty last summer. Last Sunday the pull chord finally snapped and it was time to visit Wes, who lives just a few blocks away.

Only in Calftown will you see a couple walking their dogs and pushing a lawnmower. The girls were excited about visiting their old haunts and it was a lovely evening for canine and mower to bond.

In my prior life I used to take the lawnmower to a local dealer in town. It would usually take two weeks for them to get around to it, and cost us a bundle for yearly maintenance.

Wes came out and took a look and said no problem, he'd fix us right up.

Our mower is a Toro and about five years old, and a little love will probably keep it running just fine for a few more years, so spending a few bucks is no big deal.

"Oh," Wes said. "It will be ready tomorrow night." 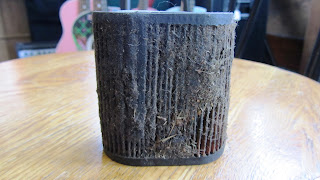 So we came back the next night and sure enough, we could tell for the first time in several years that the mower was red and the tires were still black, not gray-green from years of crusted grass all over them.

"The blade was bad," Wes said. "And the oil was terrible. This is what it should like like. And never let the filter get that bad again."

He gave us a long list of all the stuff he fixed. I'm happy, Sheryl is happy, the dogs got an extra walk and Wes has cash in his pocket.

I was thinking about mowing this afternoon, but Sheryl reminded me to wait until she's home.

"That blade," she said, "is extra sharp. Maybe you should have somebody with you."

True. A new lawnmower is nothing to trifle with.

I TEACH GUITAR lessons at Second String Music, the store Sheryl and I opened a year ago. Four nights a week, we sit in the back room of the old barber shop and hoot and holler and have more fun than should be allowed.

I don't read music and I don't bother with a lot of theory or minor  diminished chords. Instead, we start with technique and learn the seven major chords and build from there. When my students start getting better than me, and it doesn't take much, I send them on to our legendary teacher Warren Riley or to Lenny down at Vancil Performing Arts Center.

I teach all ages, from 8-year-olds with huge potential to 50-something beginners, to guys and gals that just want to sharpen skills and get some tips and guidance while we play. Cause that's all we do, play.

I'm into improvement and making sure we have fun. Slowly but surely, students will get better at making that transition from the nasty F chord to the G. Hey - it's "Old Time Rock & Roll" with the dreaded G C D arrangement, and we are getting the strum pattern down ... let's party!

I don't have a bad apple in the bunch and they are all unique, with a wide range of skills and abilities. One little girl, 9,  hardly says a word during our lesson, and if I make her smile or stick her tongue out at me, well, we are getting somewhere, for sure.

The girl, Avery, announced about a month ago (actually her mother said it for her) that she wanted to learn a Taylor Swift song called "Love Story." Now. Being a scarred product of 1980s prog and hair band eras, Taylor Swift makes me cringe. Like most of the young stars of the day, she's a product of careful and calculated country music media propaganda. Except she keeps sticking around and keeps cranking out hits, and her live shows sell out. Now she's making perfume commercials and denying that she's in love with Justin Bieber or whatever flavor of the month stud is out there.

And she writes her own songs, plays the guitar, decides what her stage looks like, looks like she's having a blast and living the star life. So I will give her that, however begrudgingly.

The song has dynamics. Catchy verse and chorus progression. And, save a key change at the end and that nasty B minor chord that Avery learned in one lesson without blinking her pretty little eyes, it's not that hard to play.

So we are working on it. As usual, I get just as much if not more from giving guitar lessons, and hopefully Avery is having fun. She is threatening to sing the song too, which will really be something because I've only heard her talk twice.

I bet she has the voice of an angel. Better than Taylor Swift, even!

SO BEING A crime and courts reporter at The Quincy Herald-Whig has led me to trademark the following statement - You Can't Make It Up.

Today I spent a frustrating afternoon in court waiting for two cases to come up for sentencing. Because the judge had been away, the courtroom was scheduled for three days worth of stuff crammed into an afternoon session.

After 90 minutes, the cases came up. And both were continued. One of them is for a meth guy caught cooking a few blocks from our store, the other for a gal who committed a theft so brazen and completely dumb that it, well .... YCMIU. You'll read about it in The Whig next week.

So I'm back at the office, trying to explain to the boss that his two potentially amazing Page 1A stories aren't going to happen, when the phone rings. It's Misty (not her real name) and she lives in Calftown, and the neighbors poisoned her beloved beagle terrier dog, and she read a column I wrote two years ago about barking dogs. Can I give her some advice about her barking dog?

Walk your dog, don't leave it outside unattended, and don't scold your dog if he barks. Misty downplayed how much her dog barks, because she said Fido is "spoiled rotten" and takes "doggy Prozac" because he's a bit hyper. 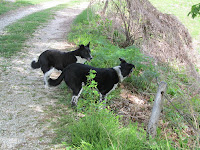 Sigh. Lucy from the Peanuts cartoon strip has it right, putting a 5 cent sign that says "The Psychiatrist is In." On a daily basis. At Fifth and Jersey.

Misty felt better, and it's 15 minutes of my life I'm never getting back, but anything to help a fellow dog lover. Doggy Prozac? Oh it's true, it's dang true.

Then I headed to our music store, Second String Music. I am talking to my beloved bride when I notice two people walking up the street and headed toward our front door.

With a start I realized it was the woman in court earlier in the day for the brazen Theft Of The Month charge. GUH. I had to make a quick decision - greet them and pretend I was just holding a notepad and taking notes for fun during their case (they know who I am, guaranteed), or take the easy way out and flee to the back room so Sheryl could deal with it. 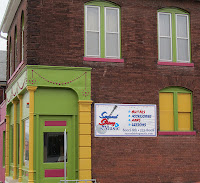 Geesh. You really think it took me more than a second?

Turns out they were looking for a guitar for their young daughter. After I explained it to Sheryl, she said, "Well, at least you didn't blow the sale. And I'm not taking a check from them."

Posted by Rodney Hart at 8:25 PM No comments:

WITH SPRING ARRIVING early in the Q-town this year, it's made me think of new beginnings.

I have to mow the lawn this afternoon for the second time already this month, and it's not even the end of March. Normally I equate mowing with getting my toenails clipped, but in the beginning of the year it's not so bad because it's a new season with the faint hope something green will cover gaping holes in the backyard.

Sometimes you need to take a step back to realize just how much new stuff you have going on in your life. In the past year, I've opened a music store with my new wife, started a new side project band, taken on a bunch of new guitar students and made new friends. 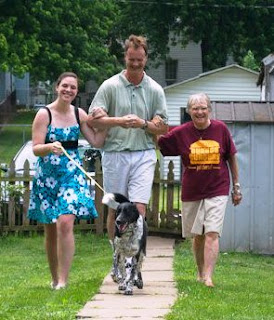 Going back a bit further, I bought a new (used) car, new (used) house, a lot of new guitar stuff, and a new John Travolta Saturday Night Live outfit for Dancing With The Local Stars, a frighteningly new event at the time that I survived with a new appreciation for the art of dance.

Last night I experienced something new, something that's never happened before. The Cheeseburgers went up to Hamilton to play at the Reneau Benefit party inside Sullivan Auctioneers. This is a great story because the mom donated a kidney to her son, giving him a new lease on life, and we were honored to play.

The auction ran long and we started playing an hour late.Two songs into the gig, the organizers came up and said we had to stop because they were doing a gun raffle and having a "Donut Eating Contest" with local law enforcement officers.

In Hancock County, gun raffles are huge deals. If they tell you to stop, you stop. And the donut thing was tremendous - six local guys sat at a table with big plates of sticky glazed donuts and Red Solo Cups full of milk, and gulped away.

I've been at benefits where the band is just background, and that doesn't work well with The Burgers - we are all about the show, and we didn't drive all the way up there to sit back.

So ... we emceed the donut eating contest. Eric McCaughey broke into a bluesy riff and he, Burt Shackleton and Jeff Van Kanegan described the cops stuffing faces with donuts in hilarious detail. Then Eric led us in a rousing rendition of "I Shot the Sheriff" and there wasn't a dry eye in the place, probably because they were spilling beer on their faces laughing so hard.

That's what I love about The Burgers. We adapt to any situation. "Every gig has a story," Jeff loves to say. We could have gone off stage and moped about it, but instead we had fun and I know the people did, too.

New people, new experiences. It's the spice of life and keeps us going, in many new and different ways.