MONICA SCHOLZ IS one of my all-time favorite people in the world. How can you not laugh and feel better about things after hanging around her? She's quick-witted and has enormous energy and musical talent. Selling her a ukulele is one of the best memories I have about Second String Music.

Monica called me a month ago and asked if I'd be interested in playing guitar for the Quincy Community Theatre's production of Legally Blonde. Actually, here's the transcript of the call ....

"Hi Rodney how are you congrats on your retirement what are you doing with yourself this summer? Need a guitar player for the musical and the music is amazing and the band is smoking and I think you'd have a blast can you do it? Great! First practice is Sunday!" 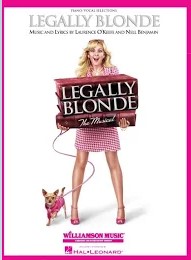 Just kidding. But really, how can you say no to Monica Scholz? With the store closing and the summer in full swing, I figured I'd have time to do it. It's July 14-17 and 21-24 at the QCT and it will be a great show.

Monica dropped off the book for the music. Uh, what exactly is a Bflat dim 7th/9 over root of Pi? How do I stretch my fingers that far? This ain't 1-4-5 blues or rock and roll, baby. I've done a lot of listening to the soundtrack and I'll never be as good as whoever is playing guitar but I'll try. And I'll learn a lot in the process.

The band is amazing. Last night the rhythm section of drummer Thomas Gunsten, bassist Alex Waters, piano player Colby Schulz and I went to the theater and played the first act so the cast could hear actual live music while practicing. They've already done an enormous amount of work because everybody knows their parts - now it's a matter of practice practice practice and fine tuning.

Thomas is a young guy and he's the rare breed of drummer that doesn't smash everything in sight. He knows the production to the last word and he's solid as a rock. Alex just graduated from Iowa with a master's degree in stand up bass performance, and I've never played with a bass player like him - he's incredible. Then there's Colby, who is playing notes and in keys most musicians can't even fathom, and he's spot on the whole time.

As for me, well, I have a long way to go but it's fun getting out of the comfort zone and stretching as a player.

Also in the band is sax player Jack Inghram (old Funions never die, they just play in musicals!). And Emily's first piano teacher, Lana Anderson, is playing keyboards. Monica knows her stuff and is a hoot to work with as a conductor.

So come beat the heat and mid-summer blues at the QCT, and hopefully the guitar player won't screw it up!