IN EARLY AUGUST, a massive window on the southwest corner of our Second String Music building was intentionally broken. It was a huge mess, and it was expensive to replace. It was obvious that somebody did it on purpose. The police responded immediately and we think they developed a suspect right away, but nothing happened.

We paid for the window to be replaced and chalked it up, sadly, to the cost of doing business. 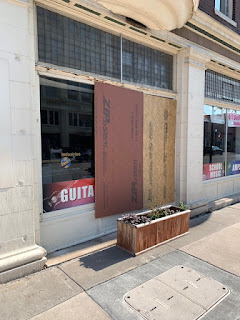 Last week, Quincy Police Officer Katie Dolbeare called Sheryl and gave her good news - she'd caught the suspect, and he confessed to breaking the window because he was angry after confrontation in Washington Park. We believe Officer Dolbeare knew who it was but she really couldn't prove it, but she didn't give up on the case.

She recently visited the suspect in the Adams County Jail, where he was lodged on another charge. Lo and behold, the man confessed to breaking the window, and he will be given a criminal damage to property ticket.

I'm sure he'll be ordered to pay restitution. Hopefully we find out when he is sentenced, because I'd at least like to be there and look this guy in the face, and impress on him just how much stress and damage he inflicted. We seriously doubt he will ever pay for the window, but that's life.

So thank you, Officer Dolbeare, for your hard work and determination and not giving up on our case. It is appreciated. Our men and women of QPD do amazing things every day.

Mary was a great neighbor

OUR NEIGHBOR AND friend Mary Dickerman passed away Saturday morning. She lived at the end of the alley with her husband, Tony, and they were great home owners who cared about Calftown and our little neighborhood. Click here for the death notice. Mary had been sick for a while and was about to enter hospice, so she's in a much better place now.

I will miss talking to Mary about the hood. She worked at Hy-Vee on Harrison and it was always great to see her smile, eat one of her samples and laugh about the chaos of the world. My favorite memory of Tony and Mary is when they'd sit in the backyard playing board games while their chickens clucked and their dog, Stella, kept a watchful eye on everything. 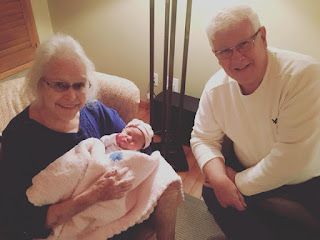 Sheryl loved bringing Mary and Tony stuff from our garden. We are friends with Amanda, their daughter and grand-daughters, Olivia and Emma. Mary passed away early Saturday morning, and Sheryl bought a plant and a card to give to Tony at his new Good Sam Home cottage.

Of course we rolled up right behind Amanda, Ben and Tony like we were stalking them or something! We are sometimes better at sneaking in and out without being caught. Overall, It meant a lot to see them and express how sorry we were to hear about Mary.

I hope the house goes to a caring family and wants to keep things anchored at the end of the alley. It's hard to drive past and not see her or Tony there now. Life, as always, goes on.

Peace to Mary and her family. Things won't be quite the same in Calftown.