SOMEBODY BROKE A huge plate glass window at our Second String Music store Monday night. I got a call from the alarm company about 8 pm. Sheryl got a call from 911 dispatch to tell her the police needed her at the store. We were there a few minutes later, and so were the police. The glass shattered and traveled at least 20 feet into the store, a huge and gaping hole. The window is right at the corner on the Maine Street side. 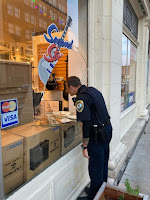 The officers (who were excellent, as always) talked to a few of the Washington Park people, but of course nobody heard anything. There were reports of a couple arguing loudly at the corner right before it happened. Who knows? It wouldn't be the first time somebody punched a window in anger. We haven't heard yet about any suspects, and the police are checking with local businesses to see if surveillance cameras picked up anything.

It left Sheryl and I sweeping up glass and wondering who would do such a thing. There's been an uptick in interesting people wearing backpacks wandering aimlessly around the park in the last week. We haven't ticked anybody off in a while or kicked anybody out of the store. Sheryl did make a lady angry last week when she asked her to stop parking in the alley behind the house but that couldn't be who did this.

Sheryl made a few phone calls and tracked down our awesome alderman, Jack Holtschlag. He came right over, looked at the window, then went to his construction company office and found two large pieces of plywood. Sheryl taped the shattered glass still in the window, and a few well placed screws later, Jack had the plywood in place and the building secure. 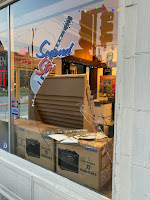 There were no blood trail or spatters. I wonder if somebody had a bat or something to smash the window, because it likely would have cut the hand if punched. It takes tremendous force to smash a window that big.

Leo, from Custom Glass & Glazing, will be here today to assess the damage and get the glass replaced. It's not the first time we've had a window shatter, though it is the first time it's been intentionally done.

I'd go on a rant about the piece of shit who did this, and how we'll post a reward for information leading to a conviction, and how it's a sorry state of the world when a business has to put up with a costly act of  vandalism. But I won't, you know. We'll get it fixed and move on. Such is life and the world of a small business. Thank goodness we have invested in an alarm system with glass breakage detection.