A YOUNG MAN came into Second String Music Tuesday and started asking questions about tone. We played a couple of the amps we have in stock, like the Fender Mustang modeling amp and the Katana. He is a fairly new player and he couldn't believe what kind of sounds were coming out of the amps.

Then he said, "How can I sound like Stevie Ray Vaughan?"

The short and simple answer is, of course, you can't. Or can you? 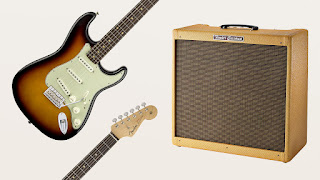 It was easy to see what the young man was implying. He loves the blues and he wants a tone like one of his guitar playing heroes. I'm all about that - I love chasing tone and sounds, though I'm not a guitar gear head or amp fanatic. Most of what I do in The Cheeseburgers and other bands is pretty straight forward - get a nice clean tone and then dial in an overdrive sound for rock songs and leads.

There are plenty of players who can mimic Stevie Ray's sound. But nobody sounded or played like him, or ever will. It was the way he approached his tone and style. He used super thick guitar strings and different amps during his day, but he never used a ton of effects or pedals.

Great guitar players are dime a dozen. The ones who are legendary are the ones who have recognizable tone. As soon as you hear Jimmy Page, Lindsay Buckingham, Angus Young, Eddie Van Halen, Pete Townshend, Eric Johnson, Tom Scholz, The Edge (just some of my favorites), you know it's them. The guitar and the tone is a reflection of their soul and spirit. It's what makes them special.

I often refer to great guitar players as being from other planets. They are wired differently than regular human beings. They also pour thousands of hours into their craft, and have a pure love and discipline to their art. And playing the guitar is an art.

It's great if a students wants to learn an AC/DC song, or figure out how Slash played "Sweet Child of Mine." Yesterday I had a student asking some technical questions about Slash's approach, and then I realized this young man is a way better guitar player than I am, or ever will be. So be it. He's taken off and is heading for a higher ground in guitar adventures, and that's a good thing.

So here's the simple answer to a very hard and complex question. How can you sound like your guitar hero? Put in the time, chase the tone, and keep striving for bigger and better things.

And, most importantly, be yourself and believe in yourself. Your sound will emerge.