Playing with the Boss GT-1

GUITAR PLAYERS ARE creatures of habit, at the same time as being tinkerers. Who doesn't like fooling around with the latest gadgets and pedals? It's easy to get lost in that kind of stuff, depending on what you do and how much you play.

I keep it pretty simple when playing out. For the bands, it's a Boss Katana or Fender Blues Junior amp, and the pedals (mostly Boss) are tuner, delay, overdrive and chorus. I do plug my acoustic into the chorus and sometimes a compression pedal for HartLess shows.

The other day I went down the YouTube rabbit hole and found this video about the Boss GT-1000. The amazing Nita Strauss, who plays with Alice Cooper among others, doesn't have any amps or a massive pedal rig. She simply plugs her guitar into the GT-1000 and it goes directly into the PA. I was struck while watching how simple she keeps it for her live gigs, though the GT-1000 has all kinds of great Boss tones and things to play with. You have to have good inner ear monitors for this kind of system, but it eliminates the lengthy setup and potential blowups of amps and pedals. She got amazing tone out of it and I'm tempted to order one from Boss as we are dealers, though it's pricey (around $1,000 retail) and it's not yet in stock. 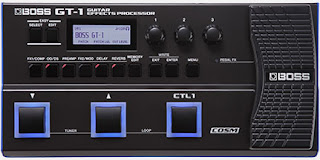 Here's a much more practical idea if you are tempted to try an awesome modeling pedal - the Boss GT-1. It's $215, it's got a bunch of preset tones and it's super easy to use. Steve Herrington and I have been messing around at Second String Music with one and it's so cool - it has a looper, expression pedal, tuner and it can be powered by batteries. It even has a headphone jack (parents of younger players love this). You can put it on the floor and plug it right into the PA and it rocks.

We only have a few in stock and I doubt we'll have any left by the end of Christmas. If we do, I'll probably snatch one up, but I'll wait until January so we can have as many as possible for sale.

I invite you come in and try it out to see and hear for yourself. Keep rocking and working on your tone, and play, play, play!

IT'S BEEN A long two years since we've had a Second String Music store party. So it's time - this Saturday, from 10 a.m. to 4 p.m. (ish), we are celebrating our annual Saturday before Thanksgiving gathering.

It will be a little bit stripped down from regular store parties, many of which spiraled delightfully out of control. We will have a jam session, store specials on drum sticks, strings, straps, reeds and rosin, and just generally a good time.

We are still in a pandemic and we are still trying to be as careful as possible. You don't have to wear a mask or show proof of vaccination to come to the store, but we do ask you be as careful as possible. You can wear a mask or not, it's up to you. Sheryl and I have had both the vaccine and the booster shot and we are feeling better about things.

If you want to jam, bring your instrument and sit in. Most of us are acoustic guitar players who just want to have fun. All skill levels are welcome.

As always, we will honor our friend Pat Cornwell, who passed away an unbelievable 11 years ago. It will feel good to hoot and holler again, and we hope it kicks off a great holiday season at Fifth and Maine.

SHERYL AND I are proud to announce we have sold our historic Dodd Building to Andrew Mays and Brian Hendrian of Quincy. We owned it for eight years and did a lot of improvements, but it was time for somebody else to step up and take renovations to the next level.

Second String Music is not, repeat, NOT, moving. We are now leasing the space. We have no plans to move and we'll keep rocking at Fifth and Maine. 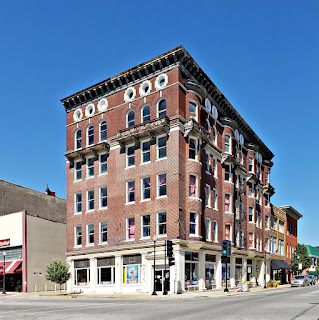 We bought the building in 2013, a year after we moved. It was a good investment. It hadn't been occupied or owned by a person who cared for a long, long time. We replaced the second floor roof, got the second floor spaces cleaned up and rented, and also got the 503 Maine space fixed up and rented. There were a lot of HVAC issues to deal with and the million other things an older building requires. We loved owning it. But we are not building renovators and it was time for a new owner.

It was important to sell it to a local entity. Brian and Andrew have big plans, starting with the elevator and putting in a new entrance on the northwest corner. We are sure they will do great things with the space.

It is a little strange to no longer go upstairs whenever we want, but it's actually a huge weight off our shoulders. Now we are off to another great adventure in owning old buildings, and we'll leave it at that for now.

Good luck to the new owners, and we continue to look forward to being your music store in Quincy!

To jam or not to jam

HERE'S SOME FRIENDLY advice about asking to play with the band. Sometimes it's OK. Other times it's not. In the end, it's up to the band.

The Cheeseburgers were playing for a party this summer and an older woman asked if she could get up and sing with us. It was in the afternoon and there weren't a lot of people there. We figured, why not? She sang a song with us and forgot most of the words and the crowd couldn't have cared less. They whooped and hollered and thought it was the greatest thing ever, and we got a huge kick out of it.

Earlier this year Cori and I (HartLess) were playing in a local establishment and an inebriated man attempted to sing with us. He wisely backed down when I towered over him and told him firmly it wasn't a good idea. Had he messed with Cori it would have ended very poorly for him, and I would have just sat back and watched.

You play long enough and you learn the hard way when and where to let things happen.

If you have friends at your show, it's no big deal to invite them up. Again, it depends on the venue and the circumstances. I like going to see my buddies play and I never have the expectation they will ask me to play with them. Never. Every situation and show is different, but tt's their show and I'm just there to hang out.

On Friday night, I was at Revelry with my buddies Jim Percy, Dave Shaffer and Brad Fletcher. We've formed a jam band called The Second Stringers. We don't play out much, we started by accident and we don't practice, but we've done a few gigs and they've gone well, and we've had great fun. 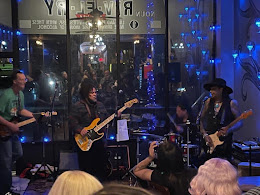 So we are rocking along and at about 11 p.m. a slew of people start walking in, and I couldn't believe what I was seeing - the legendary Micki Free was in the house! I've known Micki a long time and have always gotten along with him, and I knew he was in town with his band to play for the Prince tribute show at the Oakley-Lindsay Center. I thought his after-party was at another bar in town, but for some reason he changed his mind and headed to Revelry.

A little bit later one of his friends came up and asked if it would be OK if Micki and his bass player and drummer could come up and jam. Of course! Dave handed Micki his Fender Strat, Jim got the drummer set up and Brad graciously let the bass player use his bass. I was standing off the side and jokingly told Micki it was a bucket list item to play with him. "Of course, man. Jam with us!" Micki said.

I lowered my guitar volume and plucked along while they tore it down. Micki is the consummate showman and he soon had the whole bar rocking along. They played for about 20 minutes and couldn't have been more gracious when they got done. I think they had a blast and it was an honor to let them play.

We finally got done at 12:30, an hour later than scheduled, but we wanted to keep playing with such a fun crowd in the house. Of course when we got done a gal said to me, "I have this girl singer here and she's going to come up and sing with you now." Uh, sorry. She wasn't happy. I shrugged and move on. C'est la vie.

We played the next night again at Revelry and Jim asked if his friend could play drums with us for a few songs. His buddy, Bob, killed it and again it was more fun than you should be allowed to play.

I love the spontaneity of live music and knowing anything could happen, within reason. Rock on and make sure you continue to support live and local music!