Selling my own guitars

WHEN PEOPLE ASK if Second String Music buys used instruments and equipment, we tread cautiously. We prefer to know the sellers and are careful about dealing in the used market.

Last month we had a man we know well bring some of his guitars into the store to sell. We put several on consignment. I bought one, a beautiful Reverend Manta Ray HB. They aren't made anymore by Reverend and are incredible instruments. This one was built in 2014. But after a lot of thought, I've decided to sell it myself. I want it to be played and in a good home. 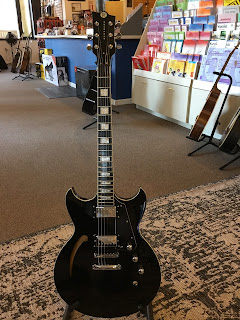 Selling your guitar because you need the money is a mistake. I did that in 2005 when I let the first electric guitar I ever bought go for a ridiculously low price. I was short on cash and I thought the money would help pay some bills. Had I really thought about it, I would have figured out a way to solve the money crunch. I kick myself for selling it.

When we opened Second String Music 11 years ago (GASP), I put three or four of my guitars on the floor because we needed inventory. I have no regrets about doing it. Just before that I traded two beautiful acoustic guitars for a hot tub, and that was a huge mistake. The hot tub stopped working after about a year. I miss those guitars. But such is life.

I'm contemplating selling a few other guitars that I rarely play. Basically it's just a thinning of the herd thing. I don't play out in bands that much anymore, and I have three amazing guitars to do band gigs with (my trusty American Strat, G&L Telecaster and Gretsch Broadkaster). I'm not letting those go.

In general, be careful when you decide to sell stuff, especially if it has sentimental value. I'll never sell the first guitar I bought, and cheap 1984 Lotus acoustic. I learned how to play on it and it's traveled a million miles, and I still strum it every now and then.

Anyway, the Reverend is on sale in the shop. Come see us at Fifth and Maine!