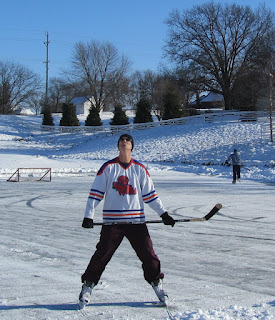 I GREW UP in Canada and was a hockey fanatic. Played the game, watched the game, breathed the game. My team was the Montreal Canadiens and it was quite a ride in the mid to late 1970s, when LaFleur, Savard, Robinson and Dryden dominated the NHL.

After moving to Michigan in high school, I started following the Red Wings, and it was both fun and frustrating to see them slowly build from being horrible in the early 80s to getting better. Sadly, it wasn't until I moved to Illinois before they started winning Stanley Cups, but it was still fun to root for Stevie Y and the boys.

Quincy is not a hockey town, and I've missed the game. The closest NHL team is a few hours away in St. Louis, and until this year they have been terrible for a long time. But the Blues finally hired a real coach and the players have "bought in," as coach Ken Hitchcock likes to say, and they have a chance to make a real run in this year's playoffs. Also, it's nice being able to watch the Blues on Fox Sports Midwest because its  announcing team of John Kelly and Darren Pang is one of the best around.

I will miss not having a team to root for, since the old and tired Red Wings didn't put up much of a fight against a much better, younger and hungrier Nashville team.

In past years I was a casual playoff watcher, but this year thanks to the NBC outlets I've watched more games, and the first round has been awesome. Right now Chicago and Phoenix are playing in Game 6 and it's been up and down, back and forth. No wonder the previous five games have all gone into overtime, and I'd like to see Phoenix move on.

Can't say much about the East, other than I'm glad the Penguins are done and I still hate the Boston Bruins.

If the next rounds are as good as this first round, then we are in for some very entertaining hockey indeed!