Dolls in the stands

SOUTH KOREA HAS recently resumed sports. At a soccer game the other day, the home team placed mannequins in the stands, since people are not allowed to attend yet due to COVID-19.

Turns out the mannequins were sex dolls, or at least people think they were sex dolls. In the settled and mystic world of Korean culture, where it's a crime to even question the integrity of soccer, this has "blown up" and created all kinds of kinky commentary.

Proof? BBC News even covered it. When the world's only balanced and accurate news organization gives you love, well, it's a big deal.

Apparently, the idea was to make it look like people were in the stands. Geesh. If you wanted to put dolls who do nothing in the stands, why not make them look like politicians or Dolphin fans? They don't do anything either

Sports like NASCAR have started back up here. Leave it to the rubber-burners to be the first to get going and repeatedly turn left in front of empty stands. Soon baseball could begin and every game will be like a Florida Marlins home game, with nobody there and nobody to care.

Fans have been marginalized for years and it's no different now. Let's get started without them! Greedy owners, players and huge TV money mean everything now. Fans? As long as they pay $200 for a cheap seat, no problem.

So why not put sex dolls in the stands instead of real fans? This could lead to all sorts of interesting questions and analysis, but it's a family blog and we'll just let it be. Just so long as the sex dolls are cheering for the right team and keeping the cheers clean, well .... it will all blow over. 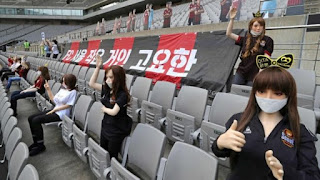