I WALK DOWN to Clat Adams Park on the Quincy riverfront a couple of times a week. It's always quiet. You have the mighty Mississippi and the two bridges and a well-maintained park to take in. It's worth heading down and up the hill from downtown.

It was a lot different this morning. The U.S. Army Corp of Engineers is unveiling its newest tug boat, Quincy, and it's docked at Clat Adams. The boat will be part of the regular river fleet. They are offering free tours all day and it's worth checking out. I noticed the Quincy Fire Department sent crews down there this morning to check it out, since they get sent to the river for water rescues. 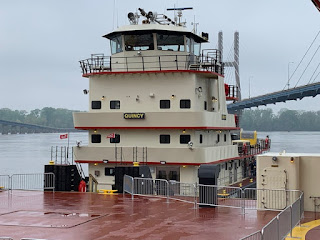 There was a city work crew doing work on several sewer drains by the Quincy Boat Club. There was another crew on top of the city water plant behind Native Wings on Front street, making all kids of racket. And, yes, there was a crew on the Quincy end of the Memorial Bridge, walking up and down with what appeared to be measuring devices and doing a lot of pointing and yelling. Hope they don't lose their voices, since the bridge won't be open again until December.

A local group has been hard at work working on redeveloping the Clat Adams Park area. Quincy and the Quincy Park District have long been proponents of sustainable and usable park space, but we have dropped the ball when it comes to the river. Smaller towns with way less resources have realized the importance and feasibility of tourism and recreation on the river. Quincy hasn't. And it's about time that changes.

The group has made major strides recently and they are to be commended for putting in a lot of hard work and envisioning better things for our riverfront. It was nice this morning to walk around and see and feel the energy along the river. Here's to hoping it continues.