OUR GUS MACKER was two weeks ago. It was a good weekend, save for a few knuckleheads. The weather was perfect and Washington Park was alive. It feels good to slowly return to normal, and this was a major step as summer looms.

This was the final Gus Macker organized by the Quincy Exchange Club. I will miss working with those guys on Macker weekend. They've done it for 30 years, so the time was right. We are hopeful somebody else in Quincy will step up and take over the daunting task of putting it on.

I've worked this tournament since 1997. Of all the crazy times and encounters and long hours on Memorial Day weekends, I have one favorite memory. And it happened at the last tournament. 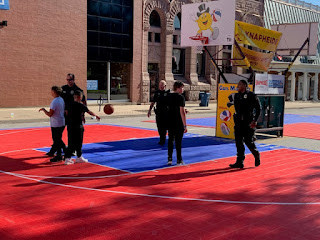 On Saturday night at about 6, games wrapped up for the day. Our Macker national staff assembled by the Lincoln-Douglas monument and prepared to head for staff dinner. I looked down the street and saw four Quincy Police officers standing on the Top Men's sport court.

We walked down to Fifth and Maine. Lo and behold, the officers were engaged in a spirited game with four young Quincyans. The four officers had worked most of the day at the tournament, and I think they were officially off duty.

And there they were, hooting and hollering with the young people, throwing up bricks and dribbling between their legs. There was a lot of excited chatter and laughing. It looked like a blast.

You can do many things as a police officer to improve community relations. You can go to the schools, you can write a warning instead of issuing a traffic citation, you can defuse a potentially dangerous situation with calm authority. You can be a presence. You can listen.

But the greatest thing you can do is simply be yourself and interact. And if you think playing basketball with the neighborhood kids on a Gus Macker Saturday night is no big deal, think again.

We have major issues in this country with our criminal justice system, and with law enforcement. I'm not sweeping any of it under a rug or pretending we don't have issues. But I will say this - I know many of the men and women in the Quincy Police Department, and they are good people. They are human and they aren't perfect. But they go above and beyond to protect and serve.

One of the young people playing is a guitar student of mine. He's a great kid, about 14, and he spends his summer days roaming the south end of town with his buddies. I think he's kind of the leader of his pack. He was definitely the leader of the team playing the police officers.

After the game, the officers sat in the shade and talked with the young people. I think they were there about half an hour. I did not hear the conversation. So I asked my young guitar student the other day what they talked about.

Stuff. I suspect they talked about life. And I suspect the young people will remember playing basketball against the cops for the rest of their lives. And they'll also remember the officers were regular people, just like them.

And that is the best memory you can ever have.