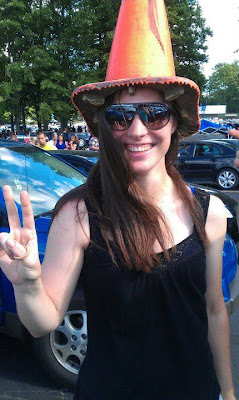 SEE THIS GIRL with the goofy smile and glint in her eyes? Well, you could see the glint if she wasn't wearing sunglasses. Obviously she is my daughter. She is wearing a cone on her head, after all.

Emily Esther Hart barged into this world 21 years ago today, and I cannot believe how time has flown. My little pony-tail girl is a senior at Western Illinois University and preparing for graduate school. She wants to play music for a living. I learned a long time ago when she makes up her mind, it's a done deal.

Emily has been looking forward to turning 21 for a long time, mostly for legal reasons. I don't pry and I assume if she's like any normal college kid, she's going to have her fun. I also know she was raised to be a responsible and caring person, and to know her limits.

I can't and don't preach to my daughter. I'm thinking back to my 21st birthday - I was a sophomore at Central Michigan University, a bunch of my buddies from Grand Rapids came up, and my roommates, Marty Horjus and Tim Penning, got a keg and hosted a party. The good thing was we put away the car keys and had a lot of fun, nobody got hurt and nobody passed out. I also vaguely remember shopping cart races by the Towers dorms rooms and some other shenanigans.

I certainly hope my daughter isn't as juvenile and dumb as her old man was at her age. Heh heh heh ....

When I think of Emily, I think of playing sock football on the front lawn, going to her high school basketball games, watching in amazement while she played the oboe at concerts, and her peals of laughter when she hung out with her buddies.

Emily  is very independent and I love her fiercely, and many times I simply let go because she's her own person and knows the drill. My parents were the same way and I was good with it.

Emily Esther Hart, all grown up with the world ahead. Blessings to her on a big day, and if she should know anything at all, it is this.

I am one proud papa!