SHERYL CAME UP with a great idea after I walked away from my job at the Herald-Whig. "You need to write some short stories, and we will self-publish them," she said.

The book world, much like the newspaper business, has been rocked with change since this little thing called the Internet appeared. So we are entering that world with fear and excitement, and it could be the coolest thing ever. 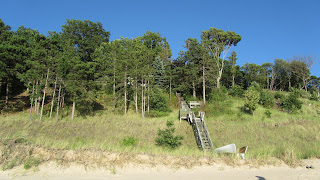 This morning I finished a short story about a week spent on my uncle's Lake Michigan beach seven summers ago. I kept seeing my mother and hearing her voice - she'd passed away three months earlier.

It was a powerful and therapeutic time and I've never forgotten it. To put it into words years later wasn't easy. But I feel really good about it.

Last week I got my old Boss digital recording system out and listened to a song I put together shortly after that beach experience. It brought back a flood of memories and nearly made me cry. The demo is really rough but the idea is there, and it sparked me to finish the short story. I'm thinking of a way to include the song with the self-published stuff.

One more short story and we have enough to self-publish a short collection, and into the brave new world we go.

Another thing I've discovered is that you have to make time to do this. So I'm spending my mornings upstairs in the office. My office. My own office. Not somebody else's office.