Original music with No Wake 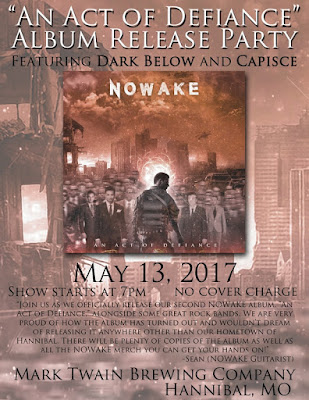 THERE IS A very cool show Saturday night at Mark Twain Brewery featuring Hannibal's own No Wake. They have just released a new CD and are really excited about playing new and original songs. Capisce and Dark Below are also on the bill. It starts at 7 p.m. and there's no cover charge.

"An Act Of Defiance" is now available at Second String Music and iTunes, among other places. I salute Sean McHargue and his band for pursuing the dream of playing original music and fighting to the good fight to be true to their craft and not compromise.

When I started getting involved in the Quincy area music scene about 18 years ago, there were several awesome original bands and solo artists pursuing the original music goal. Wish I could say that now - while there are some great local acts still around, the band scene has pretty much died for originals, save for the odd Fielder show once in a while. Zeke Cernea is still out there - he sounded great at our Concerts In The Plaza last week, and there are players like Logan Kammerer, George Cate, Kayla Obert and more doing their own songs.

Love, love, love. Unfortunately, to play in the bars and venues around here, what few are left, people mostly want to hear songs they know. I play in a band (The Cheeseburgers) that plays all covers, and we are getting ready for a busy summer - we are a good-time party band, nothing more, playing all those Cheesey songs you know and love. We don't apologize for it.

Still, I miss the days of my old band, The Funions, playing our own songs and being really excited to make and perform our own music.

If you are out and about in Hannibal, stop by the Brewery Saturday night. Support local music. Best of luck to the No Wake guys doing their own thing!