THERE ARE MANY ways to get even. Here's one of the more unique ways we've seen in a while - write out your feelings on the car of the one you used to love. 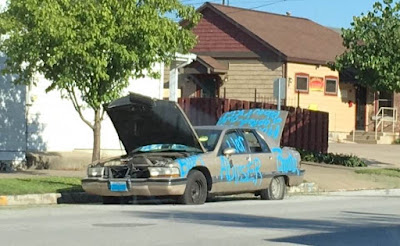 The vehicle to the right is parked at 10th and Jersey. Sheryl passed it on her way to the chiropractor this morning and took the photo. We have no idea who is involved or what the circumstances are, but it ain't good, as they like to say in the hood.

Spray painted on the car are terms of endearment like "abuser" and "lier." There's a bunch of other stuff, too, though it's hard to read. All four tires are flat. The hood and the trunk are both wide open, so you wonder if the car even runs.

On the one hand it's kind of creative, but on the other there's probably a bunch of misdemeanors waiting to happen, like damage to property.

It's been there for a while and has a police tow sticker on the windshield, so somebody's idea of letting the word know what they think will soon end.

Kinda gives new meaning to the term "wear your emotions on your sleeve ... or on your ex's car."
Posted by Rodney Hart at 10:56 AM