I'M WATCHING FOOTBALL tonight. I have friends who think I'm a bad guy and unpatriotic.

Here's the thing - I don't like Colin Kaepernick and I think he picked the wrong place and time to protest social inequality. I get his point, and I can't begin to understand what he and other African Americans go through every day. It's about culture and environment, and our country has miles to go when it comes to racial issues. Sheryl disagrees with me and thinks he has every right to protest what and where he chooses. Exercising your rights will sometimes be controversial.

I've talked to veterans about this and some are upset because millions have died for our way of life and freedoms. They think he's disrespecting the flag and our military. I get it. But other veterans think those who died serving also were protecting our right to protest and our right to point out social injustices. Our constitution guarantees that right. You can't argue with it.

But don't yell at me and call me names because I'm watching the NFL tonight. I like to watch football. That's all it is. And you sure as hell better not say I don't support veterans. Have you ever heard of Six String Heroes? Both Sheryl and I have supported this great group since inception more than seven years ago.

I'll fall asleep tonight by the third quarter anyway. Can't protest much about that, either. 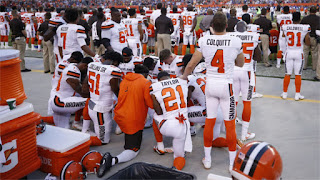