WE HAD ABOUT an inch of snow yesterday. I did have one guitar student from Missouri reschedule a lesson and I don't blame him - the roads were slippery and he just felt safer staying at home.

But. It was an INCH of snow. As usual, we had the usual Winter Weather Death Is Coming Advisories and people were slipping and sliding all over the place. If you want the best unintentional comedy ever, click on the local media pages and try not laugh. At least there were photo opportunities. Right. 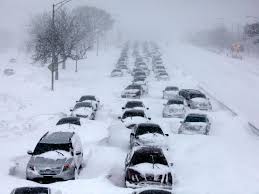 One story was about how Blessing Hospital was ready in case of a big traffic accident. There was two massive pileups in Missouri because of the weather the past few days. There were no problems with massive casualties or too many people coming to the hospital at the same time. But there could have been. And we need to get somebody from some health place to look serious and say in case it happens, they'd be ready. They probably should have commented about Quincy City Council approving stop signs instead of yield signs at a few intersections, too.

Yeesh. I do remember we had a big blizzard maybe 10 years ago and I tried ducking when coming into the Whig newsroom because we did stories for at least a week. I get it. But I grew up in places where summer was just two lousy weeks of ice fishing. So I still scoff.

My father and I were reminiscing about the huge blizzards of yesteryear. In January of 1979 there was a record storm still talked about which buried a massive part of the U.S. Midwest and Ontario in snow. My father called somebody to plow our driveway, but all the guy did was pile up the snow in front of the garage door. It took my brothers and me two days to dig it out.

We visited Emily in Rochester, N.Y., a few years ago. We got there on a Friday and it was snowing. We left three days later and it was STILL snowing. We couldn't get to our hotel one night because they had closed off the street so trucks could get the snow off the side of the road and sidewalks. "Happens all the time," Emily said with a shrug.

You get used to it, I guess. The older I get, the more I get used to the idea of living in my brother's basement in Phoenix during the winter. He doesn't have a basement. But we'd make it work.

This morning it was 11 degrees and sunny with no wind. The dogs had a great run and it was bearable and even beautiful, the cemetery covered in snow and the sun glinting off ice-glazed monuments.

In a few months we'll start bitching about how hot it is around here all the time. So it all works out.