Playing again in front of people

IT'S BEEN NEARLY a year since I've played a show indoors, save for church. So Cori and I (HartLyss) were excited to finally book a show inside, and we played last Saturday night at The Tap Room.

We are far from out of the woods yet regarding COVID-19. But our infection rates our down. Adams County has one of the highest vaccination rates per capita in the country. Cori and I have both had the virus. So we decided it was time. I was nervous about going inside again, and even though it was snowing hard (by Quincy's standards, a couple of inches), we decided to forge ahead. 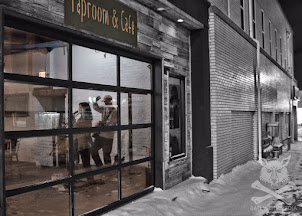 Chris Austin, the Tap Room manager, made it easy. He put us in the corner by the front entrance, with plenty of room to set up and to stay safely distant. A group of Cori's friends showed up, maybe eight or so people, and they sat together but apart at a big table. There were other people wandering in and out and toward the end of the night we probably had a crowd of 35 or so, well under the 50 percent maximum required by the state. I wore my mask when venturing out during set breaks and tried my best to greet people yet stay a respectful distance away.

I love the pic above taken by Mike Sorensen of Bad Wolf Media. He stood outside on the snowy sidewalk and pretty much captured us in all our safely distanced glory.

I felt really rusty most of the night. In normal times HartLyss plays two or three times a month, and it is like riding a bike, but Saturday night the bike had a kink in the chain. One of the many reasons I enjoy playing with Cori is that while we are not happy about messing up, we simply keep going and we chalk it up to experience, and most of the time nobody really notices, anyway. One thing I need to work on is to not talk so much between songs - shut up and play,  hoser.

It was even nice to wake up Sunday morning feeling slightly like I'd been hit by a truck. Slightly. I tried to behave. And I did make it to church.

A lot of the time in a bar we are just background music. On Saturday night we noticed almost everybody was singing along with us and actually paying attention. It was a good feeling.

HartLyss has booked some shows in March. I'm doing a thing with Pepper Spray and Smart Brothers buddy Tim Smith. The Cheeseburgers are threatening to wake up from a year-long slumber. Things are beginning to look up.

Again, we still need to be safe. Mask up and wash your hands, get vaccinated, all that stuff. I'm beginning to think we might have some live music downtown this summer. Maybe.