Every gig has a story

One thing about playing in the Cheeseburgers - it's a lot of fun, but the morning after a gig ain't pretty. Just what was the license plate of that rock and roll truck that ran us over, anyway?

Throw in hanging out with Gus Macker Saturday and Sunday for a few hours, and it was a very long but fun weekend.

It's interesting how every show is a little different. Every venue and crowd has certain dynamics. Some shows you bust your butt and nobody seems to care, others rock from the first song. 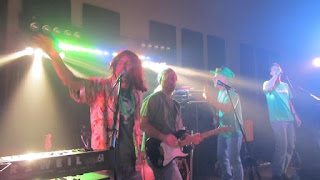 Our roadie, Frank Haxel, likes to say "We'll sleep when were dead" and "Every gig has a story." He is so right on so many levels.

Friday night we played at One Restaurant in downtown Quincy, a converted movie theater with a big stage and really cool atmosphere. There was a large dinner crowd there and a lot of them stuck around for the first few sets. By the end of the night it had dwindled to maybe 40 people, but they were all still really into it, especially the wild and crazy Gus Macker crew from West Michigan. Gus himself, Scott McNeal, even made an appearance and wanted to know if he could borrow some of our "props" for special Macker appearances.

It was especially heartening to see the guys from the young Quincy bands Somewhere In Between and Unknown Faces. I respect them because they play and write their own music, and they got a huge charge out of seeing the "old guys" play. What I hope they take away  is our love for music and the whole show aspect of what we do. We entertain and engage, not an easy thing to learn for a young band.

Saturday night we were at the South Side Boat Club in Keokuk, Iowa, This is one of my favorite places to play because the people are nuts and know how to have a good time. It was packed from the start and we experienced the dreaded "falling into the microphone stand" moment during the first set. There is no stage in the SSBC, just us in the corner, so the people are right there and dancing up a storm. 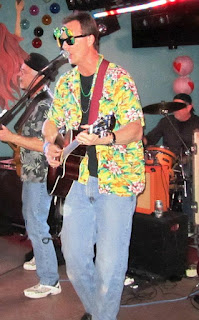 Unfortunately a lot of them left after the third set so the energy level dropped a hair , but we finished strong and the people left were appreciative.

Last night we were at the Quincy Country Club for a private party. Weddings and private parties are crap shoots much of the time, you just never know if you will be background music or actually engage the audience. This one took a while because we were outside, it was warm, and people were more into listening than dancing. Matt the manager took care of us and the people were great, so we took it all in stride.

Former Quincy Mayor Chuck Scholz was there with his 2-year-old granddaughter Nancy, cute as a button, and when we played "Brown Eyed Girl" she started jumping up and down. She knows it as the "La-Dee-Da Song," of course! Music is for all ages and  the Scholz's told us they had a blast.

Suggestion if you book a band outdoors - put the bar by the band. That's where people will congregate, and if it's not far from the action, they'll get into it a whole lot more.

Near the end of the third set we were sort of cruising. Then we played "Red Solo Cup" and wouldn't you know it, a whole flock of people scurried down to start dancing and singing along.

For the life of me I can't figure out why some songs get people going. I'm not a huge fan of the song, but Burt and Jeff were the ones who came up with the idea and it's a crowd pleaser every time. We had 'em rocking the rest of the night and even played the "Fifth Set" and stayed an extra hour. After we finished a bunch of them went swimming in the pool, and you know it's a good gig if they just jump in after partying with us all night. (Chill. No shedding of clothing took place. That we know of.)

Today I'm so sore I can't hardly sit down. I declined an invitation to play golf today at QCC, which really means I'm worn out. It's a good Memorial Day to remember our service men and woman, and recover from three eventful gigs.

We are playing Saturday night again. Just one gig on a weekend?