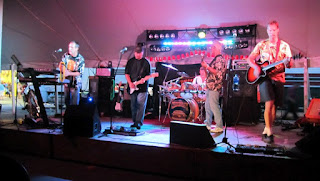 THE CHEESEBURGERS HAVE been on a really good roll lately. Harty Har Har. The more Cheese, the better!

We have had a string of fun shows. Last weekend was the Quincy Boat Club street dance, followed by a massive wedding reception at the Ambiance. Friday night we played at the Knights of Columbus Barbecue, Quincy's annual end of summer bash, and it was more fun than should be allowed.

Some folks say the K of C crowd is more into watching than dancing. Guess we proved 'em wrong,  because after about a set we had the patrons going pretty good, and they stayed up in front the rest of the show.

A good gig is all about the crowd. If they are into it and dancing and hooting and hollering, it makes everything easier. There were a bunch of loyal Cheeseburger fans and a lot of people I know in the crowd, and that translates into energy from the band.

Our bass player, Jeff VanKanagen, had family in town and it was a riot watching his little granddaughter dancing all over the place. We even got his awesome wife, Mary, to play the cowbell with us. I practically shed a tear on stage. 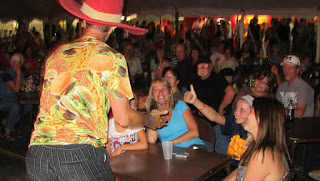 It was also great to see a couple of my guitar students in the crowd because I think they can see how much fun playing music can be. Big shoutout to Kristin Martin and her mom for putting up with the big goofball on stage. 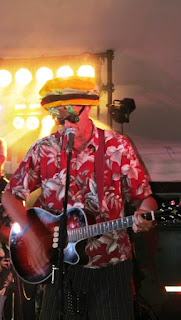 We are taking some time off. We had a gig scheduled Saturday at Adams Trading Post, but one of the band members has some important family business to attend to, and that always comes first with us. September and October are filling up fast, and hopefully I will update the Cheeseburgers schedule on our Second String Music blog site.

Some 37 hours later, I still can't move. Always the sign of a good show!