IT'S NOT EVERY day a world famous musician with his own Wikipedia page buys a keyboard stand from Second String Music. So it was our honor and privilege to meet Quincy legend Bob Havens Wednesday.

In case you don't know Bob, well, he's one of the finest trombone players in the world. Yup, the world. Take Lawrence Welk's word for it, if you want proof. Click here to read more about Bob and his amazing musical career. 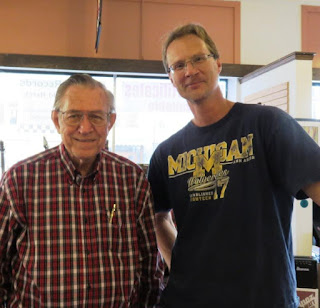 The recent Washington Theater concert to honor Bob was a huge success in Quincy. Now he's teaming up Jeff Schuecking and others for a Dixie Dads project - more info on that later. He's an inspiration to musicians every year, and age simply doesn't matter. Just keep blowing that horn!

Bob couldn't have been more unassuming and gracious in hour store. In fact, Sheryl only recognized him after he gave us a check to pay for his keyboard stand. We normally don't accept checks, but Sheryl had no problem taking one from Bob.

After all, anybody who played for Lawrence Welk for more than 20 years is good for it! And thank you, Mr. Havens, for humouring me with a photo.