DALE WAACK GREW up across the street from Woodland Cemetery in Quincy. He lives in Iowa now. He had a great Facebook post about past elections days .... so here you go, and stay outta the bars until after you vote. Although, with the way this election has gone, maybe we need to stop in the local pub for a pint or 10 to help make up our minds .... Right. Anyway, I voted this morning, and I hope you did too, and during our morning walk in Woodland I swear I heard a voice say, "Here ye, here ye. The polls are now open!"

Here is Dale's post. He lived on Monroe a few houses up from Fifth. The shed he's referring to was replaced some years ago in the same spot. 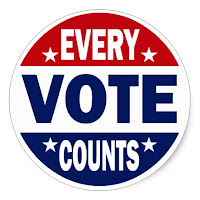 As the chaos of this campaign finally draws to a close for some reason I am reflecting back on a simpler time when elections would occur. I grew up in an old primarily German section of Quincy, Illinois, proudly designated as "Calf Town". The only thing between our house and the Mississippi River was Woodland Cemetery, a 500 foot bluff and an old paper mill right along the river. The maintenance garage for the cemetery, a quarter block away, served as the poling place for our precinct.

On election day at 6:00 AM the person in charge of the polling station would walk out to the street, ring a bell, and holler "Here ye, Here ye, the polls are now open"! At 6:00 PM the same a actions would be repeated only this time announcing that the polls were closed. Absentee ballots were for those who for real reasons were unable to vote on election day and early voting had not yet been invented.

I'm sure my parents were some of the first to vote as dad liked to do it before going to work and not have to wait in line later in the afternoon. In Illinois the taverns and liquor stores were closed on election day until 6:00 PM when the polls were closed thus preventing supporters of a candidate from buying a few too many rounds and then hauling someone off to the polls with instructions on who to vote for. (Voter fraud is nothing new.)

During my high school years I realized that next to his drivers license, the most important paper in my dad's wallet was his voter registration card, possibly from having fought in WW 2 in order to preserve the freedom to vote. Dad really valued his vote!!! Politics was not a common topic around the dinner table when I was growing up. I know dad liked Ike, but can imagine him being a pre Johnson era Democrat. Were he alive today, this may be the first election in which he would not vote as neither candidate would DESERVE his valued vote. Hmmm.......Interesting concept.