Quite the gaggle of kids, we were

MY YOUNGEST SISTER, Charys, is the keeper of Hart family records. She managed to save most of my mom's stuff after she passed away in 2005. Every now and then Charys will post a photo on Facebook to take us back.

She put this latest Hart siblings picture up a few days ago and a debate began. Where was this taken? How old were we? How impossible is the white belt I am wearing? 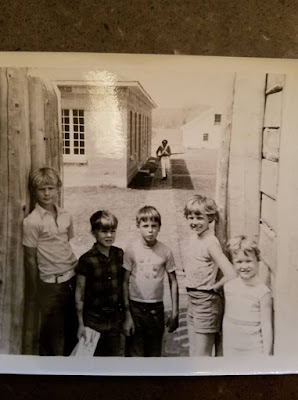 From left is me, Stephen, Greg, Kathy and Charys. "I could tell who you were by your pensive look," Sheryl says. Also, I'm a foot taller than everybody. And Steve has the chubby cheeks, and Greg looks pissed like he always did, Kathy strikes a pose and Charys just takes it all in with a smile.

Charys thought this was taken in Montreal. But I do believe my father solved the mystery of the location - it's Sainte-Marie among the Hurons, near Midland, Ontario. I can't remember what I had for breakfast, but I do recall visiting this place when we were vacationing at the Georgian Bay one summer. I remember bones of the martyrs, lots of candles in a church and a big open space with funny looking buildings. Years ago I went through some stuff and found a pamphlet, too.

You gotta love the soldier charging toward us - we were probably being too loud. For some reason I seem to remember it was raining, which is probably why my parents got us out of the cottage and doing something instead of killing each other. Maybe there was a break in the clouds when my mother snapped this photo.

So there it is - the Hart kids, circa 1975, actually behaving long enough for a picture.

What a crew were were!