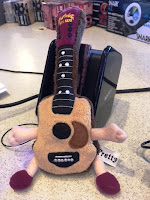 WE HAD A lovely visit this morning from Lois Costanza, wife of the late and legendary Lew Portnoy. Lew was a Second String Music Hall of Famer who passed away a last year. He loved to come in on Saturday mornings, sit in his green chair behind the counter and let Fast Eddie shed all over him.

Lois has been bringing us Lew's stuff - he was a hoarder and collector of all things guitar and music related. This morning she brought in a beautiful Tacoma travel guitar, which we are selling for her after Sheryl is done restringing. She says it is the last of his guitar gear .... Right.

Among the other things she brought in were two small pillows shaped like Martin guitars. Sheryl saved the smaller one from destruction. It is named "Fretty."

Angus, of course, grabbed the bigger of the two and immediately demanded to play. Lois was a little shocked at first but quickly realized it's his world, not ours, and she obliged. 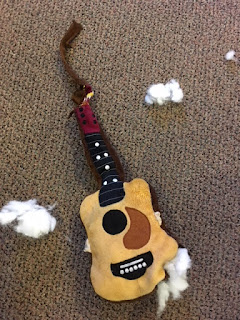 Angus has been tearing the living bleep out of the larger stuffed Martin pillow. We can't tell if it ever had a name.

There is debris everywhere and lots of barking and growling. A very nice older couple just came in to get a music stand for their grandson, and they got a big kick out of throwing the pillow for Angus. He just grunted and growled and demanded they do it again.

Our store and lives long ago went to the dogs. We love it that Lew and his hoard continue to haunt poor Lois and brings us such joy in the store. Merry Christmas to Angus!
Posted by SheyFey at 11:30 AM