SHERYL AND I thoroughly enjoyed the Christkindl Market in the Washington Theater Sunday. The booths were interesting (we got Sweet Spirits Farm goats’ milk soaps) and I almost bought five or six other things I totally don’t need. The theater looks fantastic and it’s come a long way from the bird poop covered stage and crumbling walls and ceilings of a decade ago.

The music was amazing - Robin Walden was leading a violin quartet when we walked in and the sound of strings floated through the cavernous theater like feathers in the wind. It was a bit cold but that made it even more festive.

We had a huge Saturday at Second String Music and the Christkindl Market drew a ton of people downtown and to our store. The nice weather helped foot traffic and several of our neighbors reported good sales.

The first Christkindl Market in Quincy was four or five years ago in Washington Park. There were huge tents and tons of vendors. I think it was our first Christmas at Fifth and Maine and it helped lots of people to know about our new location.

The District couldn’t rent tents the following year, so it moved to the Senior Center. I’m gonna piss some people off here by saying this, but the location was terrible and we saw no extra business, even though it’s two blocks away. 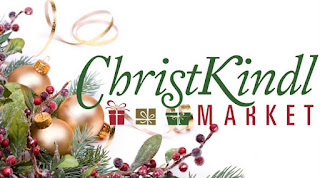 Then it moved to the old Dick Brothers Brewery. Great old building, tons of room for vendors, lots of people. But again, it didn’t drive much business downtown because it is on the southeast edge of The District.

I get it. The District is far more than just Washington Park. We need events throughout the downtown area, and we already have annual festivals and gatherings around us.

Thank you, thank you, thank you to The District and everybody who made this year’s Christkindl event rock. We’d love to have it again in the theater or back in the park. Let’s hope it becomes a longstanding Quincy tradition.
Posted by SheyFey at 10:42 AM