O'CONNOR WEALTH MANAGEMENT has officially opened next door to us at Second String Music, and we couldn't be happier for Tim and Julie O'Connor.

They bought the building last fall from Kris Kutcher, who had his hair saloon in there for 10 years. We were sad to see Kris leave but happy he's thriving near Eighth and Hampshire a few blocks away. 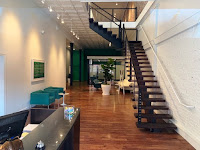 The O'Connors basically decided to gut the space and start over. For months the windows were covered and we heard a lot of banging and sawing. It finally opened this week and the space is jaw-dropping.

Formerly known as the Sears Building, it was constructed more than 90 years ago. While the main floor is somewhat recognizable, it's the back space and the upstairs that really give it a wow factor. A new staircase was built in front and the upstairs is massive, with great views of Maine Street.

The O'Connors were on Broadway but outgrew their space, so they decided to invest in downtown Quincy. YES! There's all kinds of stuff happening down here and getting a new building and business owner adds to the excitement.

Tim and Julie are great people and they are proud of their new space and eager to show it off. Welcome to downtown Quincy!
Posted by SheyFey at 10:10 AM