WE ARE IN the midst of a January cold snap. The dogs slip and slide on their daily walk, nobody wants to go outside and the ice patch at Fifth and Maine won again this morning. Ouch. The older I get, the more I hate winter.

We had icy rain Friday night and temperatures started plunging Saturday morning. Sheryl is still recovering from pneumonia and took Friday and Saturday off. Yes, the store is still standing. Yes, it's a miracle. Nine years later we are still in business and it ain't because of me, folks.

This weekend, I salted the crap out of our Fifth and Maine sidewalks. Saturday morning I managed to scrape off a half-inch of ice without landing in traction, and it got colder with a nasty north wind by the hour.

The main roads and our sidewalk were clear, but many downtown sidewalks weren't. It looked like it was thawing and freezing again, a recipe for disaster, so originally we posted online we were only staying open until noon. Then a flood of people came in and it was noon, and I figured it wouldn't hurt to keep the doors open until 1. 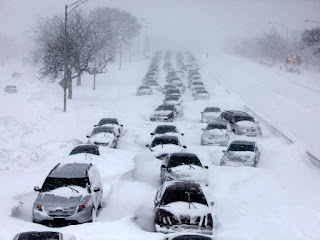 So we stayed open until 4 like we always do on a Saturday, and it was a good day.

Generally speaking, it's not a good idea to close early. The week before we closed at 2 p.m. on Saturday because it was snowing hard and the store was quiet. Then there was the infamous Jan. 2 day when Sheryl and I were both recovering from a nasty stomach virus, and for the first time in nearly nine years we were forced to miss work and not open the store. We just couldn't and people seemed to understand.

When the weather gets dicey (more snow and ice expected this weekend, BTW), it's a good idea to stay home. It's better to be safe and warm than tangle with slick roads and low visibility.

Be safe, Q-town. We are here for you even when we should close.
Posted by Rodney Hart at 12:20 PM