Rules for places with lines

IF THERE IS anything more horrible than waiting in line, please let me know. I avoid lines. I make my enemies wait in lines. I want people joining the "ALL EXTREMISTS SHOULD BE KILLED CLUB" to wait in line for eternity, just to serve them right.

I've had the joy and privilege of waiting in line at the Harrison HyVee pharmacy four times in the last week. Three times it wasn't so bad. The pharmacy employees are awesome and understanding and work very hard to help very sick people. The longest wait was about five minutes.

Sheryl started feeling poorly last Friday and went to Urgent Care Saturday. She was misdiagnosed. The doctor prescribed her antibiotics but told her to wait two weeks to take them because it was probably allergies or asthma. Sigh .... A few days earlier I had a much better experience with the same doctor.

Anyway, she had violent coughing all weekend and likely bruised a rib or lung muscle. She was in so much pain that she called her regular physician Monday. They got her in right away for a chest X-ray and called in a cough syrup prescription. And now she's been diagnosed with pneumonia. So they had to prescribe a stronger antibiotic.

It's meant several trips to the pharmacy, including last night about 6:15. There were eight people in line in front of me. There were two harried clerks trying to help two people, who were being stupid. One person insisted she had pills waiting, but she didn't have a prescription. The other had a prescription refilled but insisted the pharmacist did it wrong and didn't give her enough pills. Both customers were shown the prescription (or lack of) by the clerk, her boss, and then the pharmacist himself. It didn't matter. She threw a fit and demanded more pills.

Meanwhile, 10 people joined the line behind me.

So here are some common-sense rules for people who are going to the pharmacy.

1. Give the pharmacist time to fill your prescription. Hy-Vee doesn't take that long, normally. But this is flu season and they are swamped. Don't rush from the doctor to the pharmacy and get pissed when you are told it may take 20 minutes or so to fill the prescription.

2. Have your info ready, or at least remember your address and your wife's birthday. This includes your ID and your insurance card. Don't dig through your wallet or purse looking for your stupid gas card. Be ready when you get to the counter. BE READY.

3. If it's a new medication, the pharmacist is required to come up and give you instructions on how to take it. He is basically just reading right from the label. It's pretty simple. Listen to him, nod your head, and take your stuff and go. If you have a question, don't repeat it five times in a different way. DO NOT have him repeat it five times. DO NOT say, "What if this gives me gas?" (I'm not making it up). DO NOT say, "But these pills are so big!" DO NOT say, "Wow, that line behind me is really long now."

4. Have your insurance stuff figured out before you go. When the clerk says your medications isn't covered, don't unload on the clerk. Oh, while you were unloading, five more people joined the line.

5. If this is making you mad, just use the drive-through. Yes! Seven cars waiting behind you while you are being stupid! Even better! 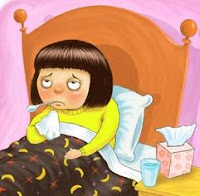 6. Don't get sick. Sheryl tried to get taken care of on Saturday which would have worked if her doctor hadn't been too overworked to see she was really sick. So stop getting sick people!

7. Be glad pharmacy employees have patience and are busting their butts during the nasty cold and flu and suffering from death season. Ugh.

Here's to hoping you are feeling better and don't have to wait in line. Because you, like me, are sick of waiting in lines. It's sickening.
Posted by Rodney Hart at 10:32 AM