Live Stream and tons of fun

CORI AND I had a blast last night doing the first-ever HartLyss Facebook live stream. Thank-you Sheryl for operating the camera and passing on the various notes and requests. We had a huge response, much bigger than I thought. Sheryl also put together a Venmo account for us, and I was stunned at the generous donations. We had so much fun that we are going to do it again next Sunday night.

Playing live is partially how I make a living. The next three weeks, and very likely beyond that, will put a major crimp in the live music scene in general. It sucks. There's nothing we can do but suck it up, and get creative. Thanks to Aspen Gengenbacher for the idea of the live stream. She rocks! A lot of local artists are jumping on the Facebook live stream thing and I encourage everybody to support them as we flatten the curve by staying in. 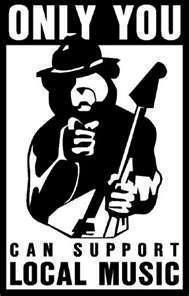 It was a little strange at first, Sheryl learned how to live stream and Hartlyss learned how to look good for the camera. But then we started seeing all the comments from our friends and family and it got really fun. This was the first time my brother (Phoenix) and two sisters (Denver and Raleigh, N.C.) have seen HartLyss play, and we also had some of my crazy cousins in Michigan and Toronto watching and presumably hooting along with us. All of Cori's crazy friends showed us how much they love their friend and also wished her a happy birthday. It was a unique experience.

I think we did three or four songs we've never done before, which is typical HartLyss style. It makes me want to practice a little more and get better. But ... we do what we do, and we have a blast, and it all seems to work out.

Sheryl and I are at the store this morning to receive a couple of large shipments. It will be a long three weeks. But ... we'll get through it. Live, streaming, hooting, hollering!
Posted by Rodney Hart at 10:08 AM