Happy 100th birthday to our elevator

Sadly, it's been about half that time since the elevator worked, to our knowledge. It was operated by hand and took doctors, lawyers, opticians, florists, bankers, and many others to their respective offices. 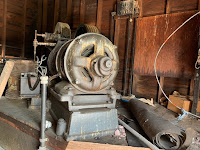 It was made right here in Quincy by the Hollister-Whitney Elevator Company. It's still in remarkable shape - the motor doesn't work but it is still up by the roof, along with the braking system.

The ropes and cables are still intact and it's perfectly safe to walk into, though we keep it closed off. It was covered up by drywall for many years, likely since the 1970s.

George Lewis, who owned the building back then, told me that it never worked when he had the property. We do know that Mercantile Bank sold the building in the early 1960s and moved across the street. Likely what happened is many tenants moved out, and as the building grew empty, the owners didn't want to maintain or fix it, so they boarded it up. 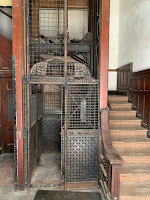 The day we bought the building in 2013, Frank Haxel and I went into the basement, broke off the lock to the elevator shaft, and opened the doors. There was nothing in there, but when we looked up we could see the underneath of what looked like the birdcage. We removed the drywall on the first floor, and there it was, encrusted in many years of pigeon poop but still remarkably well-preserved.

Several Hollister-Whitney employees have seen the elevator. I would think there would be more interest from the company, which was only about a year old when the elevator was installed.

If an elevator ever goes back into the building, the old one will have to be removed and will be quite a conversation piece. I know a downtown building owner who sold his for a good price, so it's worth a penny or two. 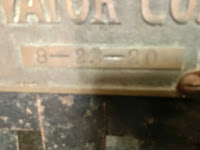 Sheryl recently removed the drywall from the upper floors, and it's made a huge difference, especially on the third floor where it was really dark. The light now flows from the shaft and brightens the area considerably. The elevator shaft is not accessible since it is caged and gated all the way to the top.

The elevator isn't original to the building, as it replaced the one installed in 1896. We know it's 100 years old because of the plaque inside the birdcage - 8-23-20.

Up by the roof where the motor and braking system is enclosed, there is a signature on the wall of the person who probably oversaw the installation. His name is H. Hoener, and it's dated 8-26-20. One could surmise he worked for Hollister-Whitney. 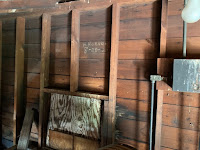 There is other writing on the walls all over the building, including the signature of A.A. Brown, who inspected the electrical wiring sometime in the 1920s. Again, it's speculation, but we wonder if that's the founder of Brown Electric in Quincy.

So happy birthday again to our elevator, and we are proud it once transported some of Quincy's more prominent citizens many years ago.
Posted by Rodney Hart at 9:42 AM