Cleaned out and rented

WE'VE BEEN CLEANING the daylight out of the upper floors of our historic Second String Music building. Into the 503 Maine space formerly occupied by Electric Fountain Brewing went massive amounts of old drywall, windows, insulation, furniture and bag after bag of dust, dirt and crumbled plaster. Throw in a small mountain of scrap metal and the space quickly got filled.

On Monday our friend Kate Daniels came into the store and asked Sheryl to help with an Adams County Democratic Party project. Then she asked if the 503 space was still for rent. When learning it was and negotiating monthly rent, we asked when she wanted to move in.

So 503 Maine is the new temporary headquarters of the Adams County Democrats, and will be through next spring's municipal elections. Sheryl had been doing research on what to do to get rid of the small mountain of junk in the space. Tuesday morning she called Clayton Roll, a young Quincy man who owns Rolling Operations dumpster rental. Two hours later we had a large dumpster in front of 503 Maine and we started filling it up.

We recruited Isaac Smith from our 505 Maine Studios space, and he got his young son Jaden to help out. Soon we were swinging heavy bags of dirt and the tons of junk into the dumpster. A couple of 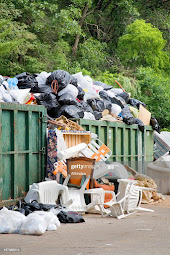 hours later we had had it filled to the top, and we tossed an old couch on the top to smash it down.

Clayton was awesome. He was willing to work with us if we needed a bigger dumpster, but fortunately the dumpster was exactly the right size. Sheryl messaged him Tuesday afternoon and he was there 20 minutes later to pick it up. His prices are fair and we are relieved to get all that junk out of there.

Yesterday I took two Jeep loads of scrap metal to Alter. In the end I got a mere $20 for the scrap, but the fact it was finally out of the space and not in a landfill was more than enough to make it worthwhile.

Our new tenants started moving in literally minutes after I left with the last load. They are happy, we are happy, and our chiropractor has picked up more business this week (Sheryl is there as I write this).

We highly recommend Clayton if you need a dumpster for your trash. Thank you Isaac and Jaden as well!