THE HY-VEE GROCERY store at 14th and Harrison is putting in a Starbucks. In Calftown, this is big news. Many of us can't get enough coffee and the thought of instant access to massive caffeine overload is a huge deal.

I'm in the store at least three times a week. I love the Harrison Hy-Vee. It's clean, stuff is clearly marked, and they are enforcing the mask rule. The employees are super friendly and always go out of their way to say hello and help you find stuff. When it gets busy and the lines pile up at the register, a manager makes an announcement and POOF three cashiers appear out of nowhere to speed things up.

There was a bank in the Hy-Vee for several years. It was never busy. I can only remember one time where there were more than two people in line. The bank employees were again very pleasant but looked bored stiff most of the time. So it came as no surprise that the bank branch didn't reopen after the spring COVID-19 lockdown. 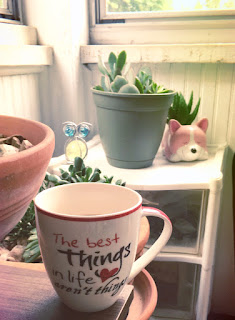 A few weeks ago the bank walls were torn down and the remodeling began. The other day there were several important-looking men flipping through construction blueprints and rubbing their foreheads in dismay, which I've been told is normal behavior when you are building something. Another guy was poking around above the drop ceiling and another was sitting on a fork lift awaiting instructions. I think at one point he put it in reverse so the BEEP BEEP BEEP sound could echo through the store. But he could have been backing up on purpose. I was distracted because I was staring at my receipt and rejoicing in the 3 cents earned on my Hy-Vee gas card.

Putting the Starbucks in the store is a stroke of genius. Who doesn't want an iced mocha latte with caramel swirl and macadamia milk? I'm fine with Starbucks and I know people who work at the main store on Broadway and it's great the three times a year I go in there. But I'd rather go to the smaller coffee shops in town.

Still, the thought of coffee while doing early morning shopping, or the Sunday afternoon rock and roll recovery shopping, is indeed tempting. I will probably succumb. There are worse vices in the world.