IN THE HART doggie house, Genie is the primary mole killer. She's an English Shepherd with a nose for snatching moles right out of the ground and then having a good play. Malcolm will join in and lick the mole. Then Angus comes over and puts the poor thing out of its misery. Snap. 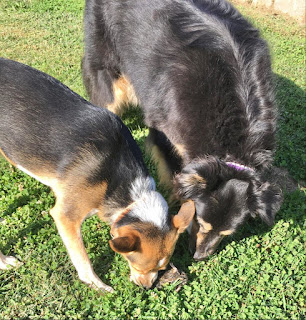 A few days ago Sheryl was walking them at their usual romping grounds when she noticed Malcolm dancing around with something in his mouth. Genie and Angus were off digging in another spot. Lo and behold, Malcolm had snatched his first mole! This is a rite of canine passage, and Sheryl was quite impressed. The other two came bounding over and Angus again made quick work of snapping its little neck. Genie was praised for her excellent teaching  the fine art of mole snatching.

We had quite a rain last night, so there are fresh mole hills all over the place. I have a feeling it won't be long until Genie and Malcolm start having a competition to see who can dig the most up. Winner gets an extra treat after the walk. Woof!