SECOND STRING MUSIC was closed Wednesday in observance of July 4. Or, more accurately, we took glorious naps and I played with the Cheeseburgers at a very warm LaHarpe fireworks show. It was nice to have a day off, but today is Thursday and it feels like Monday, and tomorrow is Friday and we get to do it all over again with another rock and roll weekend.

So what did we do yesterday morning, with the temperatures already in the 90s and the humidity the same? We cleaned the second and third floors of our historic downtown building. Smart, right? Sheryl came up with all kinds of devious ways to induce sweat and it was nasty, grimy, filthy and sweat-soaked hell. Very satisfying. 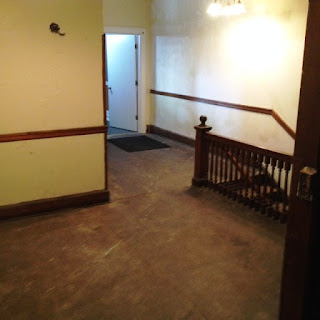 We've got a new renter coming in on our second floor, so it had to be done. We swept up probably three years of dust and dirt, especially from the roofers who were in and out in May. We mopped floors. I vacuumed like a maniac. We moved a bunch of stuff from the hallways, and along the way I found historic Second String Music items like the scaffold used at our fifth anniversary guitar smashing, and Frank Haxel's beer can bowling contraption. No worries - they are safe and sound, ready for the next round of anniversary silliness.

Speaking of anniversaries, it's been almost exactly six years since we moved from Eighth and Washington. Geesh, the memories .... Bill Calkins stopping traffic on Eighth Street so we could move Alan Lawless' "Great White Buffalo" truck, and all the people who pitched in. Sheryl spent an entire Saturday night packing, and I remember after we got everything over here collapsing in a heap and wondering if we'd make the right location decision. I think it took her six weeks to unpack it all while Frank installed slotwall and built lesson room. Aaaaahh the good old days.

Obviously, it's worked out.

It's nasty work, cleaning an old building, but it felt good to be done and it's definitely better up there. That's the thing about cleaning - you hate doing it and it's a giant pain, but it's worth it. We are also making plans to clean and paint the exterior of the building, just the first floor. We have put off that task for way too long.

Cleaned up and cleaned out. Hopefully we won't have to do it again for a while.
Posted by Rodney Hart at 10:57 AM