TURNS OUT THINGS weren't quite so bad when it came to the ceiling in Second String Music. The leaking didn't do any permanent damage and a crew is here patching and sanding, and the area will be painted.

We feared the entire area would have to come out and be replaced. It would have been really expensive and messy, so we are grateful it's just a paint job. We've gotten the second floor condensation thing figured out and should have it rerouted without issue.

We hired Ted Johnson to do the painting, and his crew is very good. They've put plastic around the entire area and hopefully we keep the dust down. They just finished sanding and now they've put on the first coat of primer - hello fumes! I'm feeling reaalllllyyyy good. You might get a deal of a lifetime on a guitar if you come in now .... just kidding. But we did have to step outside for a short time to clear our heads.

I wanted Dutch orange paint to go up there, but again, Sheryl is the voice of reason and it will be the same white color that's up there now.

So for the next day or so, excuse the mess. We've had to sardine everything into the west half of the store, and a lot of stuff has been put in the back until the job is done.

And that should be it. No more major repair projects for us, right? Bwahahahaha. Right. 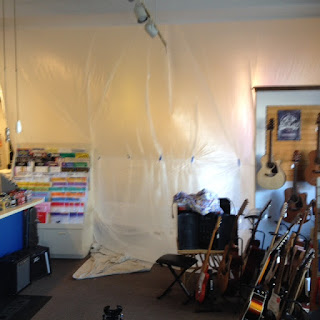