SUMMER IS THE busiest time for playing. So much going on, with four different groups. Yikes!

So I'm writing this out to keep track. Remember, support live music! Of particular note, The Cheeseburgers play this Friday in Washington Park. A lot of people think Blues In The District is every other weekend, but it's not - it's the second and fourth Fridays of June, July and August. 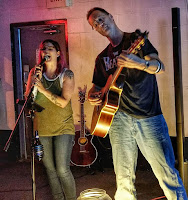