Bands shut down over noise complaints

ON THE RAIL is a fairly new bar in downtown Quincy. The owners have put together a really nice patio area for music, and recently put a tent over the patio so they could continue to have bands on the weekends.

Now the owners are frustrated, patrons are pissed and local bands miffed after a show Saturday night was called off after just a few songs. Quincy police responded after getting complaints about the volume, and shut the event and the bar down. The owners intend to address city council.

It's never good when this happens. I side with the bar owners and the bands. On The Rail has spent a lot of money to put together a quality live venue, and now the plug is getting pulled. As usual there is a lot to the story and both sides have issues. 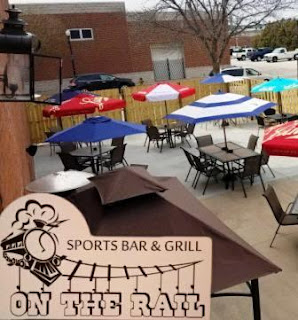 It happened about a month ago there too, to a classic rock band, so I don't want to hear that the city is biased against bands who play certain styles of music. I've played in classic rock and cover bands for years and had shows shut down over noise complaints, and it's frustrating no matter what kind of music you play.

It reminds me of a legendary Funions gig at a bar on Hampshire. The late Pat Cornwell was playing drums, and a Quincy Police officer walked in and told us to turn it down or we'd have to stop playing. So Pat nodded and made a motion with his hands on the knobs to lower the volume. The officer was satisfied and walked out. In fact, Pat turned the volume UP and the cop never came back, and we kept rocking.

The Hotel Elkton apartments are right next to On The Rail. Apparently it's the residents who are complaining and there are issues between them and the restaurant. Also, the Lincoln-Douglas building is just down the street, so if it gets loud, you'll get complaints from Fourth and Maine, too.

What I don't like is that the police can come in and shut it down without warning. Should the bar owner and the bands be told it's too loud and see if they can work something out? The bar owner says police told him he had to close the bar, too. Is that right?

I think the city needs to work with both the bar and the apartment residents and try to figure out a way to keep both happy. On The Rail has been a good venue for local bands and it would be a shame to see it close.
Posted by Rodney Hart at 10:22 AM