YOU KNOW WHERE I stand with the whole Jim Acosta-Your President thing. Duh.

Lest you think this is a left-right thing and opinion, you are wrong. I actually voted for several Republicans Tuesday and I am very conservative.

If you missed it, Jim Acosta is a reporter for CNN. He's been banned from coming onto White House grounds after a testy press conference yesterday. Acosta can be blunt and he goes after Your President all the time. Does he go over the line? I don't think so, but you can certainly disagree.

I was never banned from a courthouse or venue. But rarely a week went by when somebody didn't call me in my dozen years as a crime and courts reporter at The Whig, and let me have it. Sometimes it was deserved. Most of the time I was just doing my job.

I refused to be intimidated. And it only strengthened my resolve. 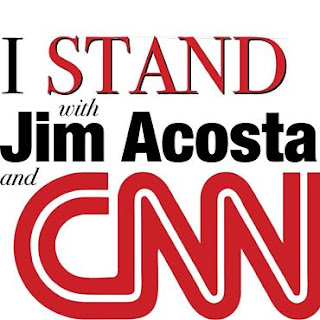 There was an attorney from a nearby Illinois town who used to have his wife call me and complain about the way I treated her husband. Geesh. She should have been in the courtroom when he ignored judicial protocol or tried to run over witnesses.

I had another attorney call me and tell me I couldn't write a story about his client. I'd just been at his sentencing (it was a You Can't Make It Up thing and worth covering). The attorney made all sorts of insinuations and used some witty sayings.

"Well," I finally said, "You shouldn't get angry with a guy who buys ink in a 50-gallon barrel." He didn't like the reply. I hung up.

There were attorneys who would simply give me a "no comment" every time I'd ask them about something. There were others who were cordial and professional, even if they weren't coming off in the best of light.

If Your President thinks he's taking care of the situation by banning a CNN reporter, he's mistaken. It won't fix anything and it only fans the flames of an already enraged populace. It's a colossal blunder.

I'm with Jim Acosta on this one. Of course!
Posted by Rodney Hart at 11:59 AM