FOR THE FIRST time in more than seven years, Second String Music is cat-less. This is a big deal, because many people come into the store just to see Fast Eddie.

A few weeks ago when Sheryl was getting shoulder surgery, a couple walked and the husband went to look at guitars. Fast Eddie ran up to the wife and rubbed against her, then sat on her lap and purred like a mad dog ... er, cat.

Eddie is very affectionate but this was unusual for him with a stranger. The wife was immediately taken with him. "I've never had a cat and I really want one, but he won't let us have one," she said, pointing to her husband.

"If you let him buy a guitar I'll let you have the cat," I said, half-jokingly.

There was more to it than that. Turns out they have a 9-year-old daughter and they've been wanting a cat for a long time. The more we talked the more I realized Fast Eddie could be going to a really good home. 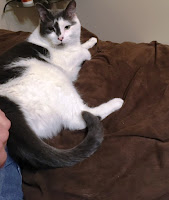 Fast Eddie was always well behaved when we have a dog in the store also. A few weeks ago I was in here by myself without Angus or Tucker and Eddie terrorized me the entire time. I finally had to lock him in the back room with his food to get any work done. When Steve Rees is in the store alone, Eddie especially went into obnoxious mode and got in the way all the time or screamed at him for treats. It is entertaining but irritating...

Look. We love the fast and fat Ed. But it was apparent he need a place with more love and attention.

So just like that, he was gone. We worried about him a bit. A week ago, his new owner texted me a photo of Eddie sprawled on a couch. "He is the king of the house. We all love him so much," she said.

Fast Eddie, a Second String Music legend, has found a new home. He's missed, but he's still fast, fat and happy, and we are happier, too!