TUESDAY WAS A good day. We figured out our cardboard deal - let's just say we have a place to bring it now. We had a huge day in the store, and in the roller coaster world of small retail, it was very much appreciated. And finally, the Blues are in the Stanley Cup Finals.

Wait a second .... did I really just type THE BLUES ARE IN THE STANLEY CUP FINALS? 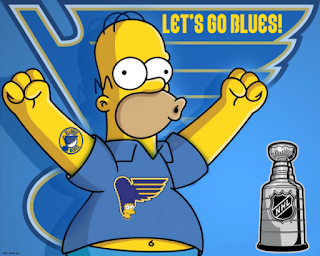 There are some die-hard Blues fans in the Q-Town and I'm happy for them. It's a great story, from worst in early January to four wins away from being NHL champs. My brother Stephen and I were at the Blues-Bruins game in February, and who knew it would be a finals preview?

Unlike St. Louis Cardinals fans, who "demand excellence" and think it's some sort of conspiracy if they don't win the World Series, Blues fans are patient and loyal. Good for them! Let's Go Blues, and also, I HATE the Boston Bleeping Bruins. Still, Bruins in six.

Here's to more good days ahead, including this weekend's Gus Macker right in front of our Second String Music doors. And again .... Let's Go Blues!
Posted by SheyFey at 10:53 AM